Conduct unbecoming a candidate: Johnson crosses a line and the race for Seat #3 gets ugly 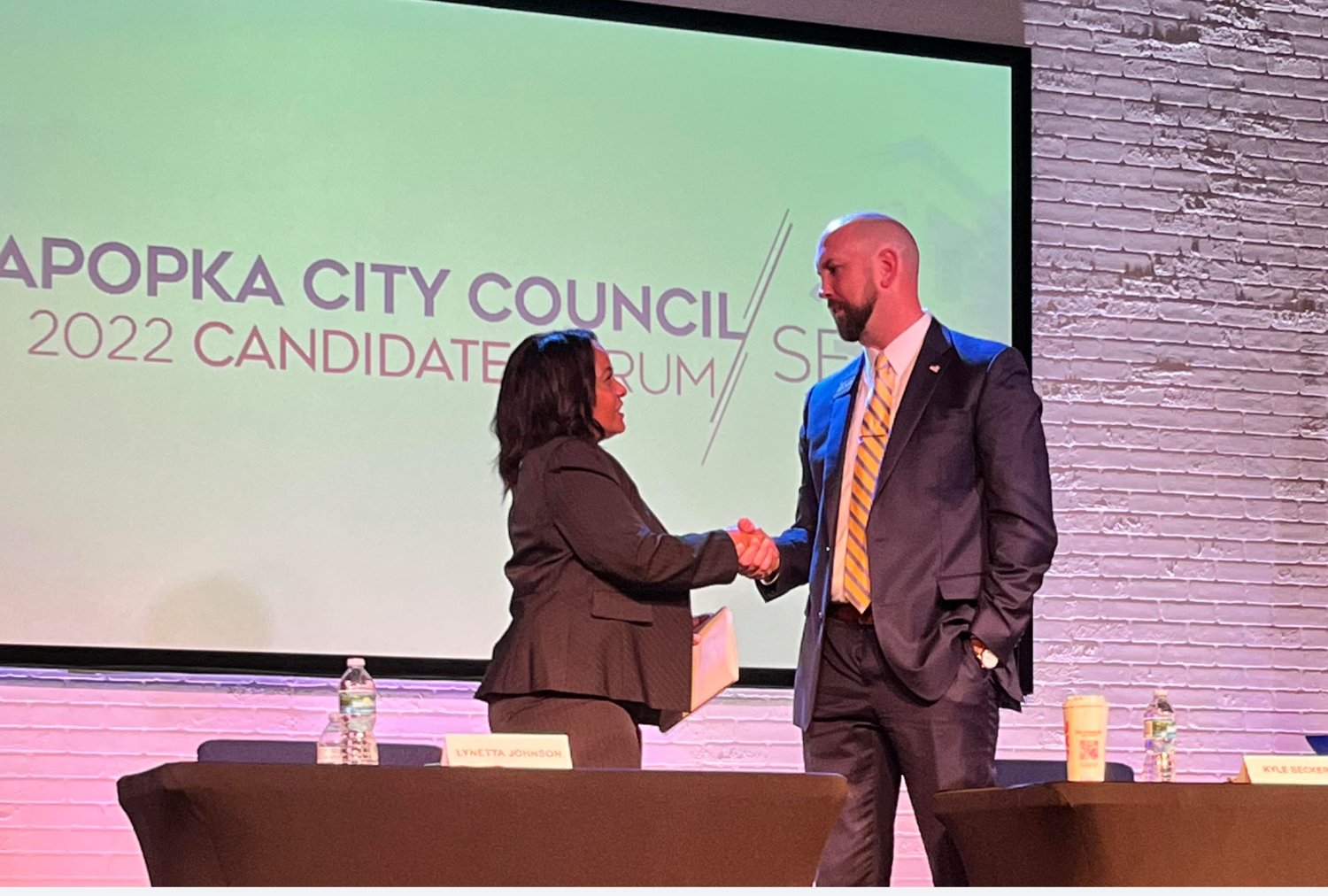 I love politics, especially municipal elections. I like getting to know candidates, watching their strategies unfold, and writing about them.

Without a doubt, debates are the most interesting setting of a campaign - when candidates stand toe-to-toe and put their ideas, vision, and values to the test against their opponents. Usually, it's in this adversarial event where the campaigns get heated... if they are going to.

But in the Apopka City Commission Seat #3 special election, the tension apparently smoldered for two days after the debate until it escalated into a five-alarm fire on social media. To say things got ugly in Apopka politics this weekend would be an understatement, similar to describing the weather in Florida this summer as a bit humid.

Lynetta Johnson is a first-time candidate running for Seat #3. Johnson is a mom, the Director of Operations for Prime Electrical Services, and a military veteran.

But on Saturday, unfortunately, she displayed conduct unbecoming a candidate.

Johnson posted the following comment on her campaign's Facebook page about Dennis New, an Apopka resident with a Becker campaign sign in his front yard and a confederate flag nailed to his fence in the back yard.

"Politics, Politicians, & "Wanna Be" Politicians
These photos are of great concern and you should be concerned too. The Primaries are upon us, 8 |23 |22. Diversity, Equity, and Inclusion are important, however, Dennis New who sits with Mr. Becker at each council meeting, proudly displays the confederate Flag signage on his fence. What does Mr. Becker mean when he says he supports multiple cultures? He spent 6 years as a commissioner and only say's he is "ONLY CONCERNED" when he is running a campaign. Saying he is "CONCERNED" but doing nothing is the equivalent of saying "SENDING THOUGHTS AND PRAYERS" and NOTHING ELSE.
Follow through and action are ESSENTIAL.
Eagle Scout vs. USAF Veteran"

It might be easy to chalk this up as a rookie candidate trying to gain ground on a former commissioner with name recognition and experience. It's certainly not the first or last negative attack we will see in the 2022 elections. But this attack was particularly nasty, and it extends beyond Johnson.

Considering the fallout from Johnson's post, I didn't want to take anything for granted, so I texted Nelson and Manley and asked if they were mad at New, Becker, or Johnson.

"Why would I be mad at Lynetta?" Nelson replied.

Manley did not answer the text, but considering she hosted a meeting for all Seat #3 candidates (at the time, there were four) at the chamber office except for Becker, there are not a lot of dots to connect.

I also contacted Johnson on her Facebook messenger to clarify her meaning about connecting Becker to the confederate flag on New's fence, but she did not respond.

Certainly, if you are going to accuse your opponent of racism in any form, you better have stronger evidence than an indirect connection between your opponent and an Apopka resident that is not connected to the Becker campaign in any form.

Nelson and Manley have both experienced scathing posts on local social media pages. Johnson used her closing remarks in the debate to complain about a post aimed at her that involved her daughter.

"I will share with you a personal event that happened to me this week," Johnson said in her closing remarks. "And it just really made me realize how callous some people can be was just very sad. Someone chose to put on Facebook, an incident with my daughter. She suffers with bipolar. And they thank God for the Apopka Police Department. They knew how to assess the situation. To try to mirror that to my character. I'm a veteran, I serve my country. I want to serve my community. And when someone needs help, you get them help. You don't make fun of them. You don't make fun of anybody. I just wanted to share that I am a human. But guess what, I am a wonderful person. Thank you."

Becker was understanding, if not prophetic, in his closing statement.

"A lot of times, and to echo your point... you know, we're up here just running for office. Obviously, when you campaign for a public office, you put yourself out there, and you kind of have to take your lumps. And a lot of times, they're unfair lumps. I'm sorry that you're having to go through that. And there's just a lot of stuff that people post on social media these days that is just not relevant to what we're trying to do, running for the commission seat. And so that's why a forum like this is good, because now we can just talk about issues, because everything should be issue-based."

It's hard to fathom that just two days later, Johnson would take aim at Becker, making an unfounded allegation with no direct evidence connecting him... and one that Nelson and Manley would respond to in support.

In a city commission election, no issue that relates to Apopka should be off the table. However, personal attacks should be off limits, unless you have direct evidence of something pertinent to the voters.

Johnson crossed a line with her weekend post and the race for Seat #3 got ugly.

Becker has a six-year history of votes, statements, and opinions available to Johnson to research, critique, and then contrast and compare herself to him based on those facts.

It's also puzzling to understand the comparison of Johnson's military record with Becker's Eagle Scout award that he received at age 17. Ironically, Apopka holds the Eagle Scout program with enough high regard that it has an annual Golden Eagle Award Dinner to honor a local dignitary.

I suspect that is an honor Johnson isn't going to win in 2022.

Apopka has had an unwritten history of its City Council members and Chamber Presidents staying out of active local elections. I've often asked Council members and chamber presidents if they plan on endorsing a candidate in an Apopka election. To date, I have always received a hard "no" from them all.

But this election seems to be going down a different path.

For Nelson and Manley to respond, even with a "mad face" emoji, to such a negative post from Johnson about Becker suggests they are in support of that post. This isn't a harmless "like" a person might use on Facebook for a little league baseball team winning a game or a "Happy Birthday" greeting. This is a post about a former commissioner and candidate accused of racism or tolerance of racism.

At a minimum, a mayor and chamber president should better articulate themselves on a matter so serious with a couple of sentences to express their specific opinion if they choose to take a side in an election or on an issue - even in a social media post.

My intention in today's column was to analyze Thursday's debate, but the comments made by Johnson about Becker on Saturday put it pretty far in the rearview mirror of this election cycle. And that is disappointing because Apopka voters would learn a lot more about the candidates in a debate than they will in a 116-word attack on Facebook.

There are 15 days remaining until the final votes are cast in the Seat #3 election. I can only hope the trajectory of this race reached its low point on Saturday and that the final two weeks will be about issues that impact Apopka voters.