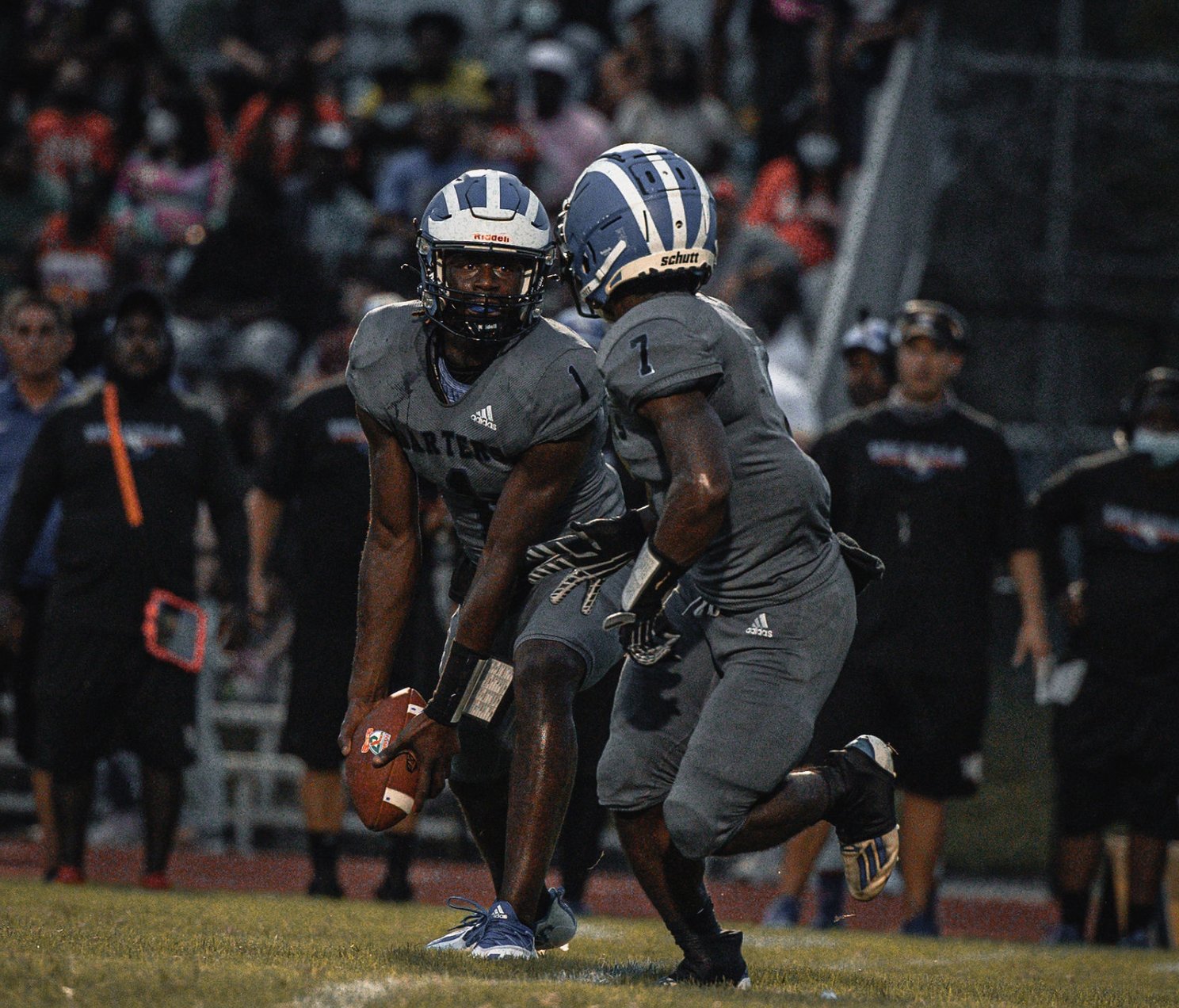 In what can only be described as a classic confrontation between two state powerhouses, the Blue Darters and Seminoles saw five lead changes and two tying scores during this epic battle.”
This Week

Apopka (11-2) travels to Port St. Lucie to face the Treasure Coast Titans (10-1) in a state semifinal on Friday.

They say revenge is best served cold, but for the Apopka Blue Darters, revenge was best served up on a crisp night in Sanford... by a kicker.

Andrew Kennedy, Apopka's senior placekicker, hit an extra point in overtime to give the Blue Darters a 28-27 victory over the defending state champion Sanford Seminole High Seminoles. The win also gives the Blue Darters (11-2) the Class 8A Region 1 crown and sends them to the state semifinals next Friday night.

It also avenged a 28-24 loss last season against the Seminoles in the regional finals.

In what can only be described as a classic confrontation between two state powerhouses, the Blue Darters and Seminoles saw five lead changes and two tying scores during this epic battle. The two heavyweights went toe-to-toe trading punches for four quarters and an overtime period before Apopka emerged standing.

The Seminoles got the early lead when junior quarterback Luke Rucker hit senior Demari Henderson for a 79-yard-touchdown pass. The extra point was blocked, but Seminole led 6-0.

Momentum shifted to the Blue Darters when Seminole drove to the Apopka side of the field, but senior cornerback Nikai Martinez intercepted a pass at the Apopka 12 and ran 88 yards evading tacklers to tie the game at 6-6. Kennedy's extra point attempt was successful and Apopka took its first lead 7-6.

In the second quarter, the Blue Darters extended their lead when senior quarterback Andrew McClain hit Keandre Brown for a 65 touchdown pass. The point-after gave Apopka a 14-6 lead.

The Seminoles tied the game later in the second period when Rucker threw a six-yard touchdown pass to junior wide receiver Darren Lawrence to cut the lead to 14-12. Lawrence then ran in a two-point conversion to tie the game at 14-14.

But before halftime, the Blue Darters regained the lead when McClain hit senior running back Quincy Frazier on a 29-yard strike to give Apopka a 21-14 lead, which they held until the fourth quarter.

But on the last drive of the fourth quarter, the Seminoles drove 94 yards on 21 plays and tied the score with seven seconds remaining when Lawrence scored on a six-yard touchdown pass from Rucker. The extra point tied the game at 21-21, sending the Blue Darters and Seminoles into overtime.

In high school overtime, teams line up at the 10-yard line in a first-and-goal scenario, but Seminole only needed one play to score when Rucker hit senior Ja’Cari Henderson on a 10-yard pass to give the Seminoles a 27-21 lead, however, the extra point was failed when an errant snap from center didn't allow the kick to be attempted.

On its overtime drive, the Blue Darters only managed to gain eight yards in three tries... setting up a do-or-die fourth down at the two-yard line. But on that attempt, junior Zeldrick Roberts slammed into the middle of the line and powered his way into the end zone to tie the game 27-27.

On his game-winning effort, Kennedy's first kick was blocked, but the Seminoles jumped offsides. His second attempt was perfect to give the Blue Darters a 28-27 win.

The Seminoles end their season with an 11-2 record.