Why gas is actually cheap in America

Gas is at record-high prices in the United States, but it still costs far less than elsewhere in the world. But in the long run, Americans might pay for that privilege.

This summer at the local gas station in Tabor, Iowa, Stacey Rycroft, and her husband reached an undesirable milestone: $100 to fill the tank of their Chevrolet Traverse.

That frustration has been palpable everywhere. With average US gasoline prices reaching a peak of $5.19 in June and currently hovering at ~$4, Americans have canceled vacations, reconfigured commutes, and plastered gas stations with stickers blaming Joe Biden.

In a recent survey by The Hustle, 75% of respondents said they thought gas was overpriced in the US. 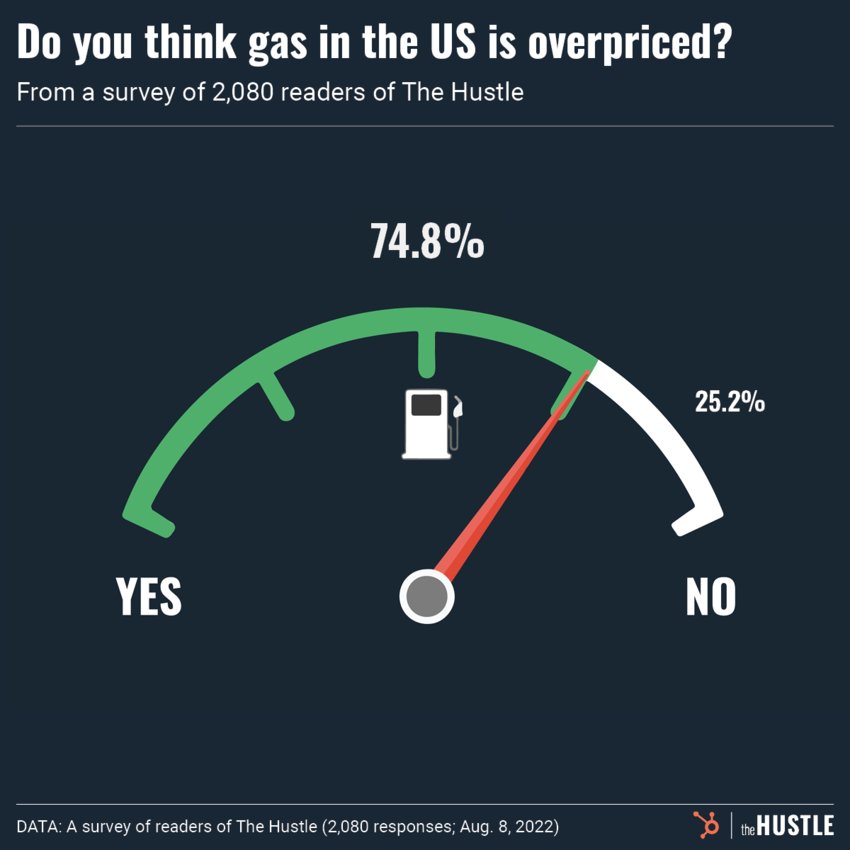 But there is a surprising truth amid the inflation: Compared to other large nations,gasoline in the US is actually extremely cheap.

Countries game the consumer cost of gasoline through taxes and subsidies, leading to wildly different prices around the globe. In the US, prices are far lower than most large economies because of comparably light taxes at the federal and state level.

“It’s been a priority of the public for decades now to have inexpensive fuel and gasoline,” said Garrett Golding, senior business economist at the Federal Reserve Bank of Dallas.

As hard as it is to think about during an expensive summer, the US faces a gasoline tax dilemma: The relatively cheap gas Americans rely on comes with heavy, hard-to-solve costs for the public.

All about the taxes

Back in late July, while gas was ~$4.61 at the pump in the US, things were far worse in the UK. Abroad, the Brits were paying nearly double that, at ~$8.50 per gallon.

Crude oil (the stuff that comes out of the ground) was more or less the same price wholesale in each country, as it’s traded on the global market. While the US is a leading producer of crude, it still imports much of its stock from other countries.

The discrepancy didn’t come from the price of the gasoline itself, but mostly from the taxes paid on the gas. In the US, gas taxes have always been shockingly low. 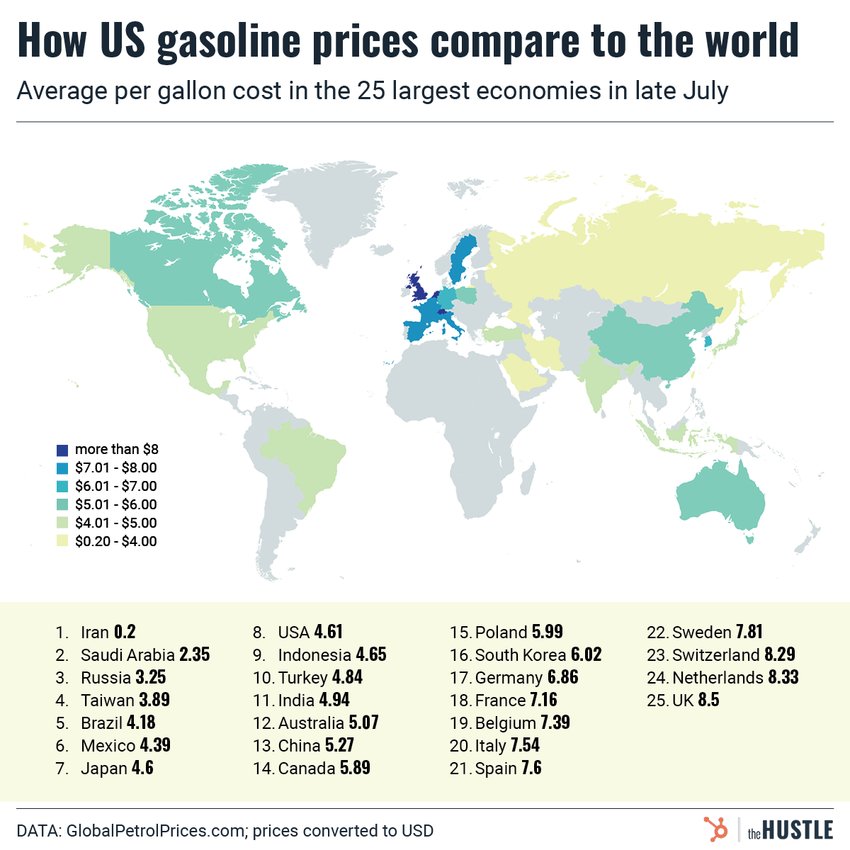 The federal gas tax (an excise tax levied during the production process) was first charged in 1932 at 1 cent per gallon and is now 18.4 cents per gallon — an increase which tracks close to inflation.

But the federal gas tax hasn’t gone up since 1993. And as time has passed, the burden of the tax has weakened substantially.

Of course, states and many localities throw in additional taxes. Some states, like California and Illinois, issue taxes upwards of 60 cents. But according to August data from the US Energy Information Administration, the average state tax is 32 cents.

That puts the average American tax at ~50 cents per gallon — well behind most other large economies.

When you consider earnings, American gas is even cheaper on a relative scale.

The cost for 100 gallons of gasoline, based on the average price in late July, takes up a smaller share of the country’s per capita GDP than any other nation in the world, including Iran, where people paid 20 cents a gallon last month. 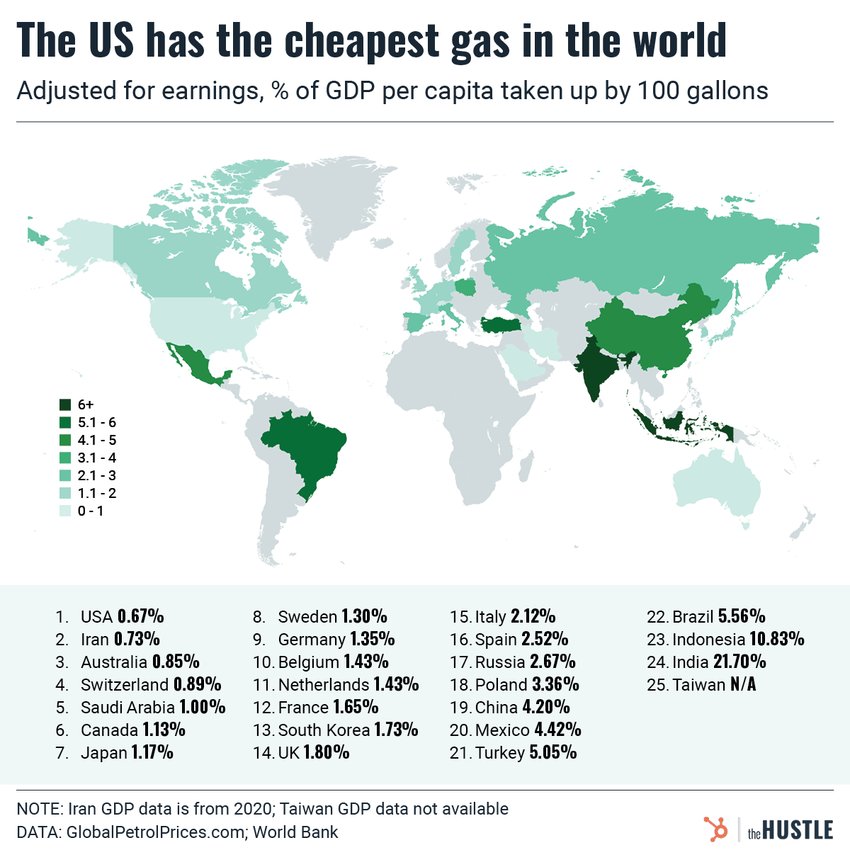 Iran subsidizes the cost of its state-owned oil, selling a vast supply to its own population at a discount.

It’s a strategy “to keep political peace,” according to Boston University economics professor Jay Zagorsky, and not entirely different from the US strategy of light taxation.

“Iran is actually taking a loss by selling that gasoline,” Zagorsky said. “The United States government is not taking a loss. They’re just taking a smaller cut than, as an economist, I believe they could be.”

Why the gas tax is low

On a recent afternoon, Angela Miller was trying to think of another way to get to work besides driving. The closest bus stop to her home in Conway, a suburb outside Little Rock, Arkansas, is 1.5 miles away.

“I’d have to walk that far just to get on a bus, assuming that one crosses the river,” Miller said.

Similar issues exist in most US rural, suburban, and urban areas.

Contrast that with older European and Asian cities that continued to invest in transit during the highway era. Or with Canada, which despite following a similar growth trajectory as the US, has a more extensive transit system. 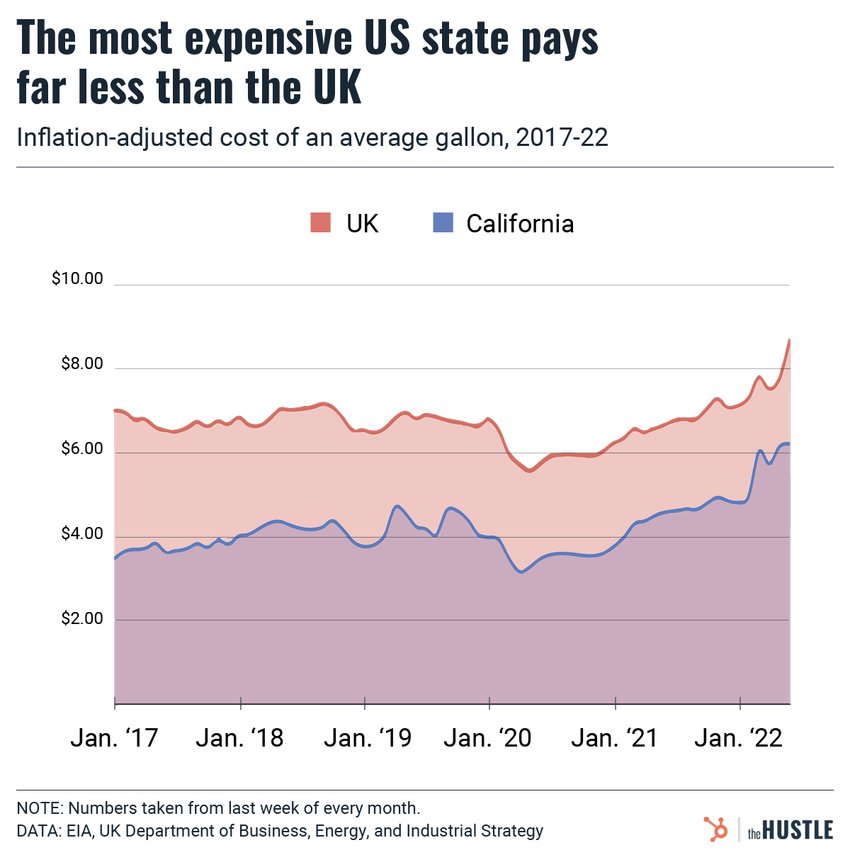 “Governments don’t pay for anything,” said Ted Kury, director of energy studies at the University of Florida. “The people pay, and if they’re not paying through taxes, then they’re paying through convenience, comfort, and safety.”

To cover the societal costs of driving, economists have thrown out several estimates for what America should charge as a federal tax, from ~$1 to ~$1.50 per gallon.

German economist Stefan Tscharaktschiew looked at Germany’s gasoline tax of ~$2.50 per gallon (one of the world’s highest) and found it should be ~48% higher to account for the burdens of driving.

Obviously, none of those suggestions have turned into reality. But most Americans are willing to pay more for their gasoline — if they believe they’ll get something in return.

The complications of raising the gas tax

People have been surprisingly receptive to the idea.

Agrawal’s polls indicate the share of respondents who support a tax hike rose from 23% in 2010 to 48% in 2021, an increase she partially attributes to awareness of the country’s dilapidated infrastructure. In this year’s poll, taken mostly in February when inflation picked up, the share fell to 38%.

When the poll indicates the tax revenue would go to improving roads and reducing traffic and accidents, more than 70% of respondents have said they would favor raising the tax.

Yet raising the gasoline tax has been a dead end in politics.