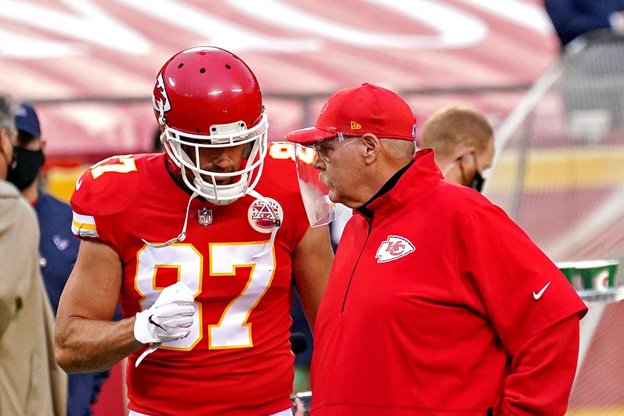 The Kansas City Chiefs are having a forgettable offseason given the people they’ve lost. The team is going into next season without Tyreek Hill, with the wide receiver heading to the Miami Dolphins. They’ve also seen former quarterback coach Mike Kafka go to the New York Giants.

Kafka, who has joined the Giants as an offensive coordinator under new head coach Brian Daboll, is the first significant coaching staff departure since Matt Nagy left for the Chicago Bears at the end of the 2017 season.

Kafka’s departure came as a bit of a shock given he was considered to be next in line for the offensive coordinator job at Kansas.

The Chicago native spoke to the media during his new team’s offseason workouts and shed some light on his decision to leave the Chiefs.

Kafka, 34, said he enjoyed his time in Kansas but had to make the best decision for himself and his family. He also noted that he wouldn’t take the job on any team and the right people needed to be involved.

“Yes, (the Chiefs are) a great team,” he remarked. “It was an awesome experience. But this opportunity was something that was special to me and my family. It wasn’t just something I took on a whim. I wasn’t just going to go to any team. It had to be built the right way with the people, the Mara family, (Brian Daboll), Joe (Schoen), the players that we had here. So it was all that encompassed. But of course, I have a lot of great relationships and great people in the Chiefs organization, and I respect them and have a lot of respect for the coaching staff and the guys there.”

Kafka isn’t yet aware of whether he or Daboll will be the one calling plays for the Giants but wasn’t shy over admitting it’s something he wants to do.

“Of course,” he said. “I think every offensive coordinator aspires to call plays, so yes.”

The former quarterback has gained experience working under Andy Reid and New York should be all the better for it. But he insists the Giants’ offense will be unique and, while it will take advantage of his background with Chiefs, it won't be copy and paste.

Reporters quizzed Kafka on working with Reid and his influence but he was more intent on speaking about what was going on in New York.

“I think everyone has to have their own personality to it,” he pointed out. “Again, those were great learning experiences that I had there, but that’s in the past. Right now is today in Phase 3. We have our installs. We have all our installs scripted for the remainder of the camp. We’re working within the daily installs, working out the details, making sure we continue to fine-tune those things in our offense.”

The Chiefs will certainly miss having someone like Kafka around but they already have one of the best quarterbacks the NFL has ever seen. Losing Hill is the real sore point. It remains to be seen just how they will cope next season but they are the second favorites to win the Super Bowl next season and Caesars Kansas sportsbook will have some of the best deals for residents.

The Chiefs knew they were in need of a rebuild after trading Hill to Miami and heading into the NFL Draft. They had some options in the second round, such as Velus Jones Jr., who completed a 4.31-second 40-yard sprint that is right within Hill range. However, they picked Skyy Moore out of Western Michigan.

Moore is nothing like Hill, especially based on build. The 5ft 10in 195lb player ran 4.41 at the 40 and, while he isn’t expected to replace Hill, the Chiefs hope to see a positive impact on their passing game.

"Skyy is unique," GM Brett Veach said. "He is smaller, but he plays big. He has longer arms. He was a running back that transitioned to wideout. It was funny watching his tape because it seemed like we were watching forever before we saw him drop a pass.

"We have guys like MVS [Marquez Valdes‐Scantling] that has some size and speed, Mecole [Hardman] has speed, JuJu [Smith‐Schuster] is big. So I feel like we have a good combination and now we just wanted to add the best player, regardless of size or height, just guys that we feel are going to come in and be able to contribute right away. Certainly, Skyy is one of those guys.”

Other WRs in Byron Pringle and Demarcus Robinson have also shown Kansas their backs, which means there will be a bit of pressure on the rookie.

"I feel like the receiving room I'm walking into has about everything," Moore said. "I feel I bring versatility and just another playmaker."

Financial Survival After the Death of a Loved One

How to Get Help if You Are a Veteran