Sen. Bracy's push for college scholarships and a feature film on the Ocoee massacre of 1920 gets funded 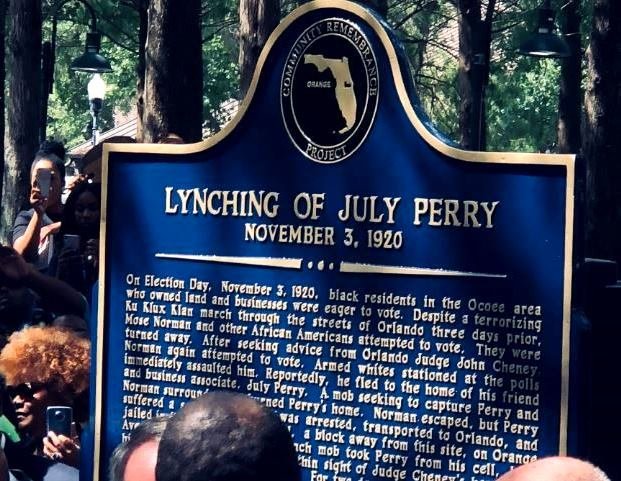 The Truth and Justice Center of Orange County unveiled a historical marker in downtown Orlando in June 2019 in memory of July Perry, a victim of the 1920 Ocoee Election Day Riots. Credit: Orlando Police Department.
Posted Thursday, May 6, 2021 11:29 pm

The “Randolph Bracy Ocoee Scholarship Program” will offer 50 scholarships to eligible students per year, “in an amount up to $6,100, not to exceed the amount of the students’ tuition and registration fees”

The Ocoee Election Day Riots of November 1920 will also be brought to the big screen, as Bracy was instrumental in pushing for a project involving students at Valencia College to produce this historical feature film

More than 100 years ago, a two-day riot took place in the small town of Ocoee in Orange County, where Blacks were killed and forced to flee their homes for daring to exercise their right to vote.

During the 2021 legislative session, raising awareness of Black history and culture in Florida was a priority for Black Democratic lawmakers, including state Sen. Randolph Bracy.

Initially, Bracy had hoped for reparations for descendants of victims of the Ocoee massacre, but was unsuccessful in pushing legislation to that end.

However, in the 2021-22 state budget that was recently approved, Bracy secured funding for a college scholarship program for direct descendants of victims or current Black residents of Ocoee.

Members of the Florida House and Senate approved another initiative to highlight the horrific events through a film production. Bracy, who represents part of Orange County, has been a staunch supporter of educating residents about African American history overall.

“This was something that was worked on by myself, the Senate President and the Speaker well before session started,” Bracy said during a news conference Wednesday in Orlando.

“I told them how important this was to me and we worked out the details about how this program would look.”

Descendants have already been made aware of the new scholarship program, Bracy added. “There are some people that are eligible,” he said. “So, we are waiting to see who that would be, and they will have to apply through the state.”

The state will spend $305,000 for the scholarship program, according to budget records.

The “Randolph Bracy Ocoee Scholarship Program” will offer no more than 50 scholarships to eligible students per year, “in an amount up to $6,100, not to exceed the amount of the students’ tuition and registration fees.”

Meanwhile, the Ocoee Election Day Riots of November 1920 will also be brought to the big screen, as Bracy was instrumental in pushing for a project involving students at Valencia College to produce a feature film depicting the carnage.

The film will be made available to Florida schools in hopes of becoming part of the “statewide history curriculum” and submitted to film festivals across the country, legislative records show.

State lawmakers in both the Florida House and Senate approved the $1 million budget for the film entitled “July in November: The story of the 1920 Ocoee Election Day riots.”

Valencia College, a public community college in Orange and Osceola counties, has a facility fully “equipped with the technology to produce a film completely in-house,” according to legislative records.

The riot included the lynching of Julius “July” Perry, a wealthy Black man. Ku Klux Klan members were furious about Perry’s attempt to vote in a presidential election and for encouraging others to vote in the black community.

African American residents in the town were slaughtered or forced to flee their homes, leaving behind land holdings, now worth millions, that were acquired by the state.