Patriotic pups: How one 11-year-old’s idea led to a statewide and national movement 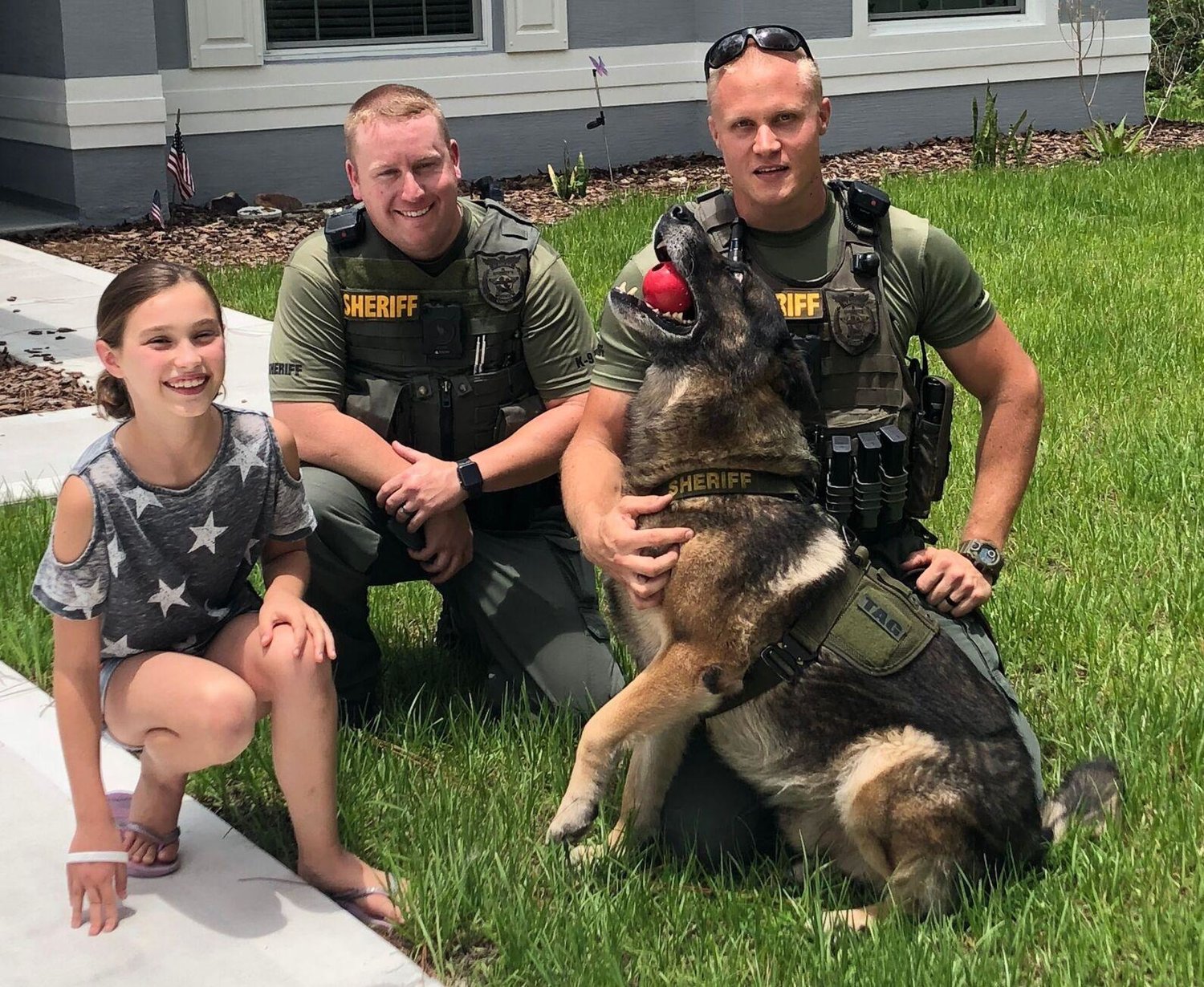 In 2018, 11-year-old Emma Stanford and her Gold Star family from Palm Coast, Florida, mentioned to their local sheriff her desire to find a canine companion. He then sent a member of his K-9 unit to her home and it was love at first woof.

Now 14, her efforts led to a new statewide program created through a law enacted this year to support retired police dogs. And her nonprofit EmmaLove’sK9s is inspiring others nationwide to help raise money to support police dogs in their local communities.

Joining Gov. Ron DeSantis last month as he signed a bill into law creating the Care for Retired Police Dogs program, she said as soon as she learned about the lack of funding for retired police dogs, she wanted to help.

“The retired dogs have served us and our communities and I believe that they deserve the best possible care,” she said.

“In Florida, we back the blue, and that includes the K-9s that are often the first to go into a dangerous situation,” DeSantis said when he signed the bill. “After dedicating their lives to protecting and serving our communities, it is important that we ensure that these K-9s are cared for by providing the resources necessary for handlers or adopters to afford their veterinary care.”

It's the first program of its kind to help fund medical bills for retired police dogs in Florida and is believed to be the first in the U.S.

The law might not have happened if she hadn’t first met Flagler County Sheriff Chief Jonathan Welker and Sgt. Robert Tarczewski – and his K-9 partner, Tag, a German Shephard. Soon after, she got her own German Shepherd, Sniper.

After she found out how much it cost handlers to care for retired dogs, she asked Flagler County Sheriff Rick Staly how she could help.

He told The Center Square he’d never thought about the cost to care for retired dogs in his 47-year career. Each dog costs about $3,000 a year, he says, without serious medical issues.

Many sheriff’s offices don’t have the manpower or funding to purchase and take care of police dogs. And those that don’t have the funds to take care of retired dogs. Working dogs have formed such a bond with their handlers that when they retire, due to age or medical or physical conditions, their handlers take them home. And up until now, they’ve been bearing the costs themselves.

One of his sergeants has two retired dogs, he says, which cost between $4,000 and $6,000. When he learned how expensive it was, he immediately changed department policy to pay a stipend to handlers.

But Emma wanted to do more and began raising money for Flagler County Sheriff K-9s, including raising enough to build a new shed, purchase equipment, and a range of other things. So far, she’s raised over $10,000, her mother says.

But Emma still wanted to do more, so she contacted her local state representative, Stan Killebrew. He told The Center Square he’s never had an 11-year-old constituent contact him before.

Usually, people contact him expressing support or opposition to a bill, he said, but “Miss Emma contacted me with an idea to help police dogs.”

Earlier this year, Killebrew introduced a bill to provide medical funding for retired police dogs. The legislature passed it, DeSantis signed it into law, and it went into effect on June 13. The program, housed under the Florida Department of Law Enforcement, allocates $300,000 in recurring funds to cover the medical costs of retired police dogs. Through it, owners of eligible retired dogs will be reimbursed up to $1,500 for annual veterinary costs.

Killebrew says it will go “a long way to help dogs that are beat up after they serve and they need medical attention.”

Police dogs are often dual-trained in narcotics and tracking to apprehend suspects. They undergo rigorous training, wear a range of protective gear, and often are the first to go into dangerous situations. Oftentimes they’re sent into the woods or a house where someone may be armed, he said. They’ll defend their handler, even taking a bullet for them.

With the rise of fentanyl flooding Florida streets, Staly told The Center Square that his handlers carry NARCAN for themselves and their dogs.

One of his dogs is trained to sniff out bombs and explosives. Another just recently helped find a missing resident suffering from dementia who was lost in the woods, he said.

He’s never met anyone like Emma before “who as an 11-year-old helped create state law to help take care of canines,” he told The Center Square.

“It just goes to show, if you have the willpower and the drive you can support your community, and in this case the four-legged canine and local sheriffs and police officers.”

“She wants to be the first female canine handler in the Flagler County Sheriff’s Office,” he said of Emma.

Many handlers rely on donations to help cover costs, and they’re contacting EmmaLove’sK9s from all over the country for help.

Dogs like Cash, a Belgian Malinois, trained in narcotics detection in Lehigh Township, Pennsylvania, for example, rely on donations coming from her nonprofit. She’s also raising money for working or retired dogs in other parts of Florida, Georgia, Iowa, New Jersey, Nevada, and other states.

She hopes to help police dogs in all 50 states and that other state legislature will adopt similar legislation to Florida’s.