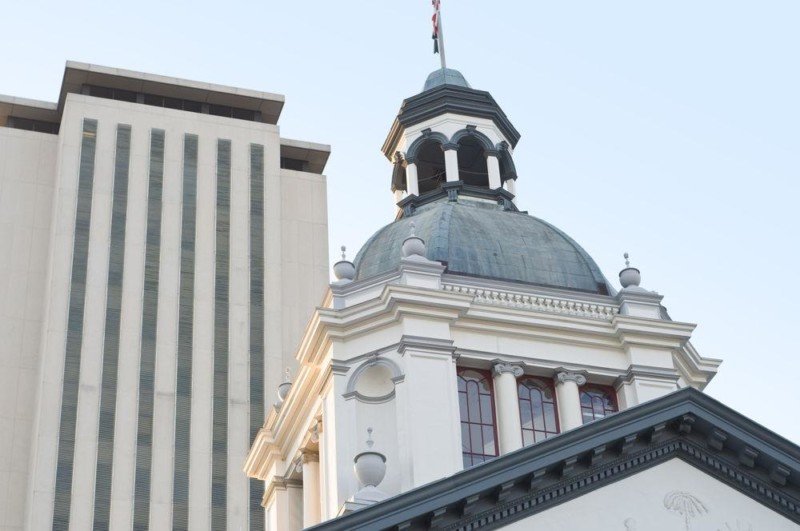 Gov. DeSantis threatened the veto even before the Legislature ignored his demand that lawmakers follow his own plan for drawing new districts — a plan that diminishes Black voting power and would give the GOP 18 of the 28 seats to which Florida is entitled following the 2020 U.S. Census.

Gov. Ron DeSantis vetoed the Legislature’s plan for redrawing Florida’s congressional districts on Tuesday and ordered the House and Senate to convene in a special session beginning at noon on April 19 to try again.

The governor acted shortly after the Legislature sent him SB 102, containing its congressional redistricting map, on Tuesday morning.

He’d threatened the veto even before the Legislature ignored his demand that lawmakers follow his own plan for drawing new districts — a plan that diminishes Black voting power and would give the GOP 18 of the 28 seats to which Florida is entitled following the 2020 U.S. Census.

“Our goal is for Florida to have a new congressional map passed by the Legislature, signed by the governor, and upheld by the court if challenged,” they said.

“Therefore, it is incumbent upon us to exhaust every effort in pursuit of a legislative solution. We look forward to working with our colleagues and Gov. DeSantis during the upcoming special session on a congressional map that will earn the support of the Legislature and the governor and fulfill our constitutional obligation for the 2022 redistricting process.”

“Gov. DeSantis’ veto of the congressional map is a continuation of his legacy to disenfranchise minority communities. It’s another authoritarian play to rig our democracy. Shameful,” Crist wrote on Twitter.

“The governor’s decision to veto the congressional maps is solely because he wants to diminish the voices of Black voters in North Florida, despite what federal law and the Florida Constitution require,” Fentrice Driskell of Hillsborough County, policy chief of the state House Democratic caucus, said in a written statement.

“The governor must remove his heavy hand from this process and concern himself with the real problems facing us today. Skyrocketing property insurance rates are out of control, and our housing crisis is making Florida too expensive for many Floridians. We need real leadership and solutions, not a presidential campaign masquerading as a state government,” Driskell said.

DeSantis announced his veto during a news conference in the Florida Capitol, saying the Legislature appeared to have been caught between adherence to the Florida Constitution’s Fair Districts Amendment, which among other things forbids diminishment of the voting rights of racial and language minorities.

“In their, I guess, understandable zeal to try to comply with what they believed the Florida Constitution required, they forgot to make sure what they were doing complied with the Fourteenth Amendment of the U.S. Constitution,” DeSantis said.

Litigation has already been filed in state and federal court asking for judges to draw a new congressional map in light of the impasse between the governor and Legislature. DeSantis said he expects stays in both cases pending the outcome of the redistricting special session — even though he still expects the courts to weigh in regardless of that outcome, given that it will leave one side or the other unhappy.

Plan A, Plan B

The Legislature actually approved two versions of a congressional map: Plan A would shrink an existing Black-held seat so that it fits in Duval County only, leaving Blacks to the west — including Gadsden County, the only majority-minority county in Florida — in a solidly Republican district.

Plan B would leave a version of the existing district in place. The incumbent there is Al Lawson, a Black Democrat from Tallahassee.

The Newman memo argues that both versions of the Legislature’s map fail constitutional scrutiny — the sprawling version because it’s not compact and is “bizarrely” shaped to include discrete Black populations across North Florida.

The smaller minority district, in Duval, is just a little more than 35 percent Black, a significant diminishment from the 46.20 percent Black voting-age population within the existing Black district, the memo argues.

To the extent that Fair Districts violates the Fourteenth Amendment, DeSantis argued, it might become “problematic.”

“There was pervasive evidence in the middle part of the 20th Century of, basically, not allowing very many people to vote based on race. And so, you had very tough medicine, but there was a showing as to why using race in that regard was something that appropriate,” he said.

However, Fair Districts apply “to the entire state with no showing that it would be appropriate to use race in that fashion. I think that that raises huge constitutional concerns.”

Furthermore, Fair Districts forbid drawing districts to favor incumbents or political parties, but Black districts favor Democrats, given voting trends, he said. “The analysis is, can the district elect an African American Democrat.”

DeSantis noted recent U.S. Supreme Court rulings that he said support his view. The justices just recently threw out a legislative redistricting plan for Wisconsin because it would have created an additional Black-leaning district in Milwaukee. In February, they reinstated an Alabama map against a complaint it packed Black voters into a single district.

He thinks the Legislature will get the point, he said.

Although the governor called the session exclusively to debate congressional redistricting, he said he wasn’t averse to extending the call to discuss other problems, including rising property insurance rates.

At any rate, he added, he expects the Legislature to address insurance rates before the next regular session opens in March 2023.