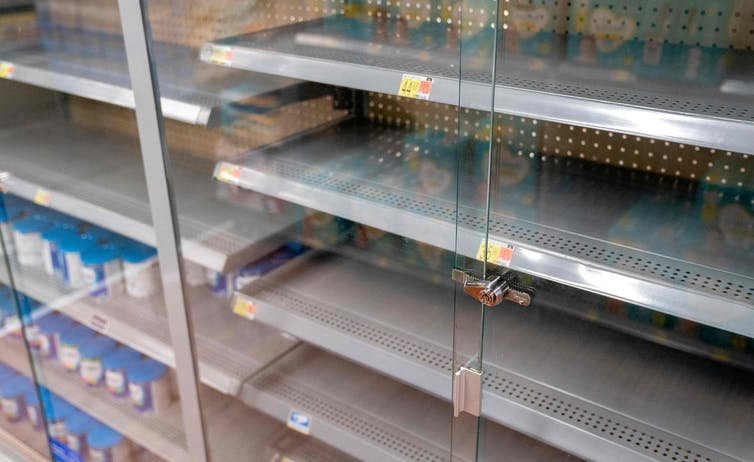 In the first six months, babies should only have breast milk or formula – anything else fed to them will be nutritionally incomplete. So there is a risk that a shortage will mean that babies will not be getting the nutrition they need to develop. That could lead to a range of health problems affecting their physical growth and brain development.”
By Steven A. Abrams, University of Texas at Austin

A baby formula shortage has added to the woes of American parents already confronted with the pressures of raising an infant during a pandemic in a country ranked low for family-friendly policies.

Media reports have highlighted the plight of mothers, fathers, and caregivers across the U.S. who have scrambled to find scarce supplies, or driven long distances to buy formula.

But what is behind the shortage? And how can it be prevented from happening again? The Conversation asked Dr. Steven Abrams, a leading expert on pediatric health at the University of Texas who has advised both the formula industry and government on infant nutrition, these questions along with what advice he could give parents facing problems getting adequate supplies of infant formula.

1. Why there is a shortage of formula now?

There are really two factors that have driven the current shortage. First, we have the supply chain problem, which has affected all manner of goods since the onset of the pandemic. It eased off a little, but then at the beginning of 2022, it became worse.

Then in February a major baby formula manufacturing plant in the U.S. went down. The FDA shut down Abbott Nutrition’s factory in Michigan. The closure came after Abbott’s nationwide recall of multiple brands of formula, including routine Similac cow milk-based formulas such as Similac Advance and several specialty formulas for allergic babies, including Similac Alimentum and Similac EleCare.

Closing the factory had to be done amid an investigation into bacterial infections in connection to a powdered formula produced at the plant, and the deaths of at least two babies. The problem is there just isn’t much redundancy in U.S. infant formula production. In other words, there aren’t enough other factories to pick up the slack when one goes down. The Michigan plant is the largest producer in the country, so when it goes down, it put added strain on the entire U.S. formula distribution system, especially for certain formulas for babies with high-risk allergic diseases and metabolic disorders.

Over the last couple of weeks, the shortage has gotten worse. I can’t say for sure why this has happened. But I suspect there has been some hoarding going on as parents get anxious. Stores can limit the amount of formula that people can buy, but that doesn’t stop people from going online to buy more.

On top of that, the shortage has gained wide publicity in newspapers, on TV, and in political speeches. All that publicity feeds into the public sense that the system is failing, prompting more panic buying and hoarding.

2. Who is the shortage affecting?

A majority of parents will feed babies with formula at some point to meet their nutritional needs, especially older infants. At birth and on days immediately after, around 80% of babies receive all their nutrition through breast milk. But by the age of 6 months, the majority of babies get at least some formula. The proportion of year-old babies receiving formula is even higher. This is largely the result of social dynamics and pressures - mothers going back to work after giving birth, but not receiving sufficient support to produce and store sufficient amounts of breast milk.

But the shortage will affect some parents more than others. Not surprisingly, the most affected parents are those with the lowest income. The federal food program for poorer women, infants, and children, called WIC, provides formula for a majority of babies in low-income families. But costs have gone up and formula has become scarcer.

I’m hearing of some families driving two hours to find stores selling formula. Obviously, that will be harder to do for poorer families as there are costs involved. Likewise, more affluent parents may be able to buy more expensive, so-called elite brand formulas.

The other thing to note is that the shortage is affecting both regular infant formula, and specialized versions. Regular or standard formula is the type most families are familiar with, and around 95% of formula-fed babies get the standard type. Specialized formula is for babies with unusual requirements, due to allergies, damaged intestines, or special nutritional needs. Before the Michigan factory closed, it made most of the specialized infant formula used in the U.S. So it is an absolute crisis for families needing that type of formula.

3. What are the potential consequences of the shortage?

In the first six months, babies should only have breast milk or formula – anything else fed to them will be nutritionally incomplete. So there is a risk that a shortage will mean that babies will not be getting the nutrition they need to develop. That could lead to a range of health problems affecting their physical growth and brain development.

Then there are concerns that parents may be using unsafe alternatives, like watering down their baby’s formula. People have been known to try and make their own by mixing powdered milk or vegan milk with vitamins. Not only are these alternatives not nutritionally complete, but they may not be entirely sterile.

After the age of six months, things get a little better once the infant is able to start eating solid food. But even then, formula or breast milk remains the primary source of nutrition. So there may still be a risk of nutritional deficiencies, such as iron deficiencies.

4. Are there any viable alternatives?

Over the age of six months of age, for only reasonably short periods of time, parents can feed infants whole cow milk and look into iron supplements.

It isn’t ideal and only applies to older babies. For those under six months old, cow milk is a real problem. It doesn’t have the right protein blend for babies and has next to no iron – risking anemia in very young babies. Cow milk also has a misbalance of minerals, especially for younger babies.

5. So what guidance is there for low-income parents?

It is challenging and I can’t provide a magic answer. But food banks and the WIC program have been a crucial lifeline. The WIC program in particular has proved itself to be very flexible during this shortage. When Abbott had to recall products and then couldn’t provide enough non-recalled formulas in states in which they were the WIC provider, WIC was able to change providers and reprogram EBT cards to allow low-income parents to buy different brands.

6. What can be done to prevent this situation from happening again?

First, we need to help families regain confidence in the formula production and supply system. This will prevent problems such as hoarding or making home brew formulas.

Then we need to look at how to make sure one plant going down doesn’t affect the whole system. The federal government can’t stockpile formula in the same way it might stockpile oil, as formula has a shelf life. But diversifying infant formula production is a possibility. This would involve making sure multiple factories and companies are making the formulas that this country needs. This doesn’t necessarily mean increased costs – competition could potentially drive down prices.

I believe America also needs to look at the country’s breastfeeding support system. Don’t get me wrong, some parents will always need formula. But those who want to breastfeed need everything possible done to support them. That includes better family leave policies, and help for low-income mothers who want to pump and store milk while they work.

This article is republished from The Conversation under a Creative Commons license.

Teacher, artist, and problem solver: All in a day's work for the life-changing profession of Pediatric Dentistry

5 Reasons Why Swimming is Beneficial for Baby Development

AAA: The 100 Deadliest Days for Teen Drivers Have Begun