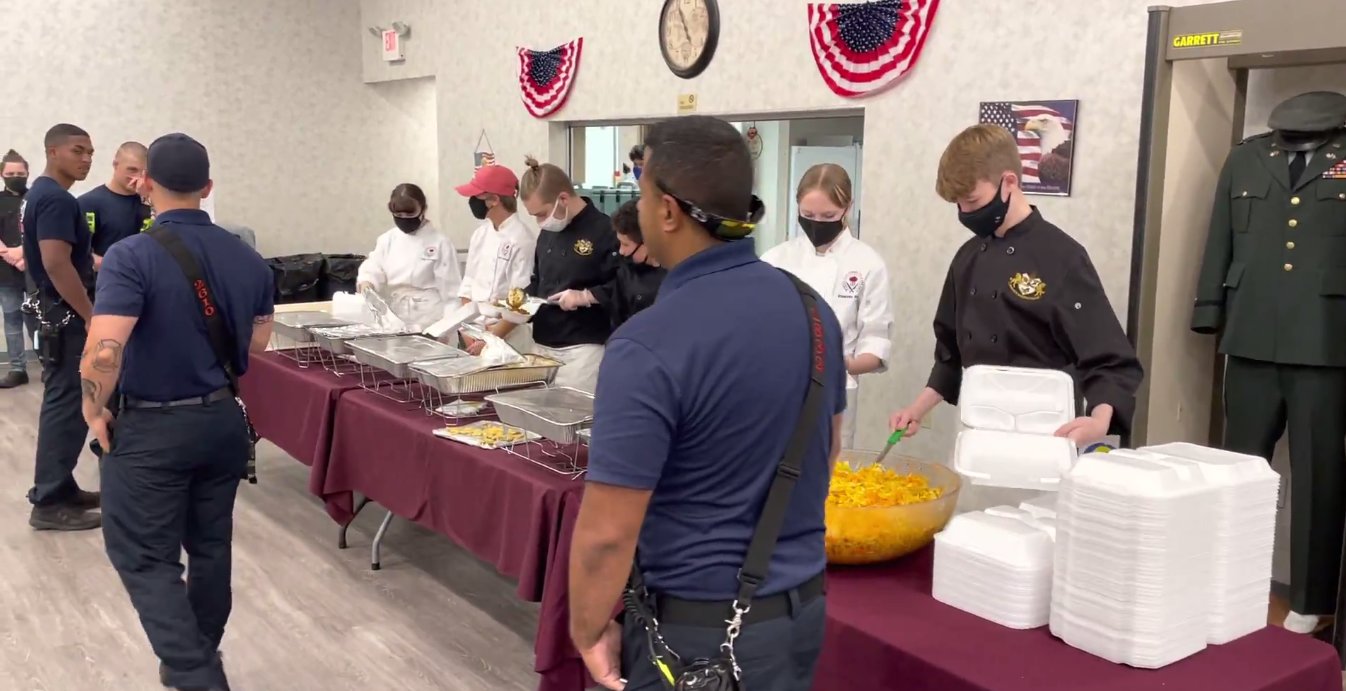 From Staff Reports and the Orange County Public School Newsroom

“It’s important to me to give back to the community. First responders do so much for us, so the least we could do is give back to them with this catering event,” said Sharda Chowbay, sophomore culinary student.

Wekiva High culinary students cooking in preparation for the banquet

As part of a summer school enrichment camp, 25 culinary arts students between the ages of 14 - 17 years old, planned and prepared a June 16 barbecue event to honor Apopka’s first responders. Collaborating with the City of Apopka’s Mayor’s Office and community volunteers, the students prepared the meal and the Apopka VFW provided the venue. A select group of student volunteers and alumni of the Magnet set up banquet tables, with the assistance of retired Wekiva teacher Lesly Shepak and school secretary Vicky Baty.

The student team served 55 frontline defenders, along with several members of Apopka's Parks and Recreation team, to a delicious banquet, fresh and warm from the oven, including:

Green beans anyone? Wekiva culinary students don't hold back on delicious or healthy

"The men and women of the Apopka Police Department appreciate the Wekiva High School Culinary Arts students taking the time to recognize them and cook the excellent BBQ", said Apopka Police Chief Michael McKinley. "All the food was fantastic and all the students that served the food were very professional. Based on the food I had, I believe all of them will be very successful in their culinary careers."

Chef Christopher Bates, Program Director for the Culinary Arts Magnet Academy, was impressed with how efficiently and effectively the students organized the event within COVID-19 safety protocols.

“Our students learn a sense of accomplishment in doing this that branches out into everything else that they might want to do. It’s not just about cooking; it’s about becoming a competent adult,” Bates said.

Pulling pork is a team effort for these Wekiva culinary students

There were 180 meals remaining after the event was over, which didn't go to waste! The volunteers and team members dropped these extra meals off at various fire stations, at the Apopka Police Dispatch Building, or were sent home with students for future meals for their families.

Apopka Fire Chief Sean Wylam expressed his appreciation for the students' generosity and talent as well. especially liking the pulled pork and slaw.

"We are extremely grateful for the meal that the Wekiva High School Culinary Arts Bootcamp prepared for Apopka’s first responders," said Wylam. "The pulled pork and Alabama Hot Slaw were well received by our department and everything was truly delicious. We were honored that the students thought of us and it certainly made our day. You could tell that they put real effort into preparing the food and were proud to be there. Again we were honored to accept this measure of appreciation and it certainly meant a lot to us."

Catering includes cleaning up, which these Wekiva culinary students do with a smile

Chef Bates wrote in an email to The Apopka Voice that he, along with all the Culinary Arts Magnet students, were proud to have served so many of Apopka's First Responders and thanks them for their service to the community. He also expressed appreciation for Mayor Bryan Nelson's support of the students and program over the years, as well as the generous donations that made this event possible from the OCPS Career and Technical Education Department, Terra Mehaffey Insurance, Sweetwater Car Wash, Chick-Fil-A of Altamonte, Dunkin' Donuts of Apopka, Fort's Diesel, Creative Signs, Cell Bros, the Byrd Family, and Debbie Rodriguez.

Nathan Marchman, a junior culinary student at Wekiva, summed it up well:

“The world revolves around food," said Marchman. "It’s one of the simplest and basic ways to bring joy to people, because when you have a full stomach, then you’re satisfied - especially with good food.”

Interested in applying to Wekiva Culinary for the 2021-2022 school year? If you love cooking, are curious what a job in the restaurant industry would be like, are interested in making a career out of serving amazing food and providing great customer service, want to explore the science behind the recipe, love the idea of competing for trophies and accolades… then Wekiva High Culinary Arts Magnet Academy is the place for you.

When the power grid goes out, could solar and batteries power your home?