Through another lens: How Wekiva High's Jamarric Hammond is balancing life as a basketball player and photographer 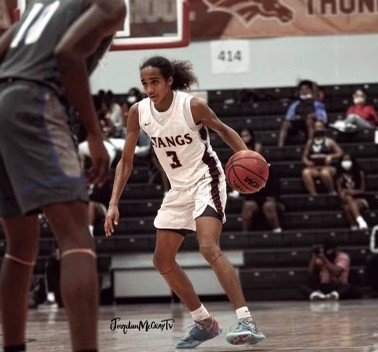 By Nathaniel Marrero, Interning Correspondent with The Apopka Voice

This rising senior may be the point guard for Wekiva High School, but there is an artistic side to him as well. And it all began in the woods.

On a free day during winter break, Hammond decided to go with his Aunt to a local nature trail. But before he left, he found his stepdad’s camera and decided to bring it along. After going on the walk and taking a few pictures, his passion for photography began.

“I liked how the pictures came out,” Hammond said. “So that same day, my mom found a camera and I told her I'm going to take this hobby and make it something. I grew a love for it real quick.”

Hammond wasted no time putting his new hobby to work. Given his experience with basketball, sporting events easily became his favorite subject. He hopes to get more involved with football season, which is right around the corner.

“I want my pictures to be more natural colors and make the grass and helmets pop,” Hammond said. “I also like portrait headshots.”

But even though his passion for photography is growing, it still hasn’t surpassed basketball.

“Definitely basketball first,” Hammond said. “I want to pursue basketball but I want to go to school for business to turn my photography into a business. I'm focused on getting my workouts in, and team practices. In college, it’ll be even harder so I’ll be more focused on basketball, and in my free time, I'll do photography.”

Hammond, who’s heading into his third season on varsity for the Mustangs, played a huge role in going from three wins in the 2019-2020 season to 11 wins last season. Wekiva came within one game of making it to the regional playoffs before losing to the Forest Wildcats 41-37.

And what propelled the Mustangs to such success in 2021?

“Just guys wanting to work hard,” Hammond said. “Everybody gelled, sacrificed some things, and we really listened to Coach Lubin, and everybody playing to their strengths.”

And what did Hammond learn to improve his own game in his junior year?

“From my sophomore year, I didn’t understand how fast the game moved," he said. "Now, I know how to make plays for my teammates. I got faster defensively, and I scout players, I know their strengths and weaknesses... I watched a lot of film. I'm looking forward to leading much better than last year, improving my offense, and seeing what I can do on and off the ball. I definitely want to win districts.”

And though it will be a challenge to balance basketball and photography, it’s something Hammond looks forward to.

“This year when my team doesn't have games, I'll be trying to go to the big games,” Hammond said of his goals as a photographer. “I definitely want to go there and shoot photos.”

Wekiva basketball fans hope Hammond gets to a few big games as a player as well.