Mayor Nelson: Carnesale not being replaced as fire chief 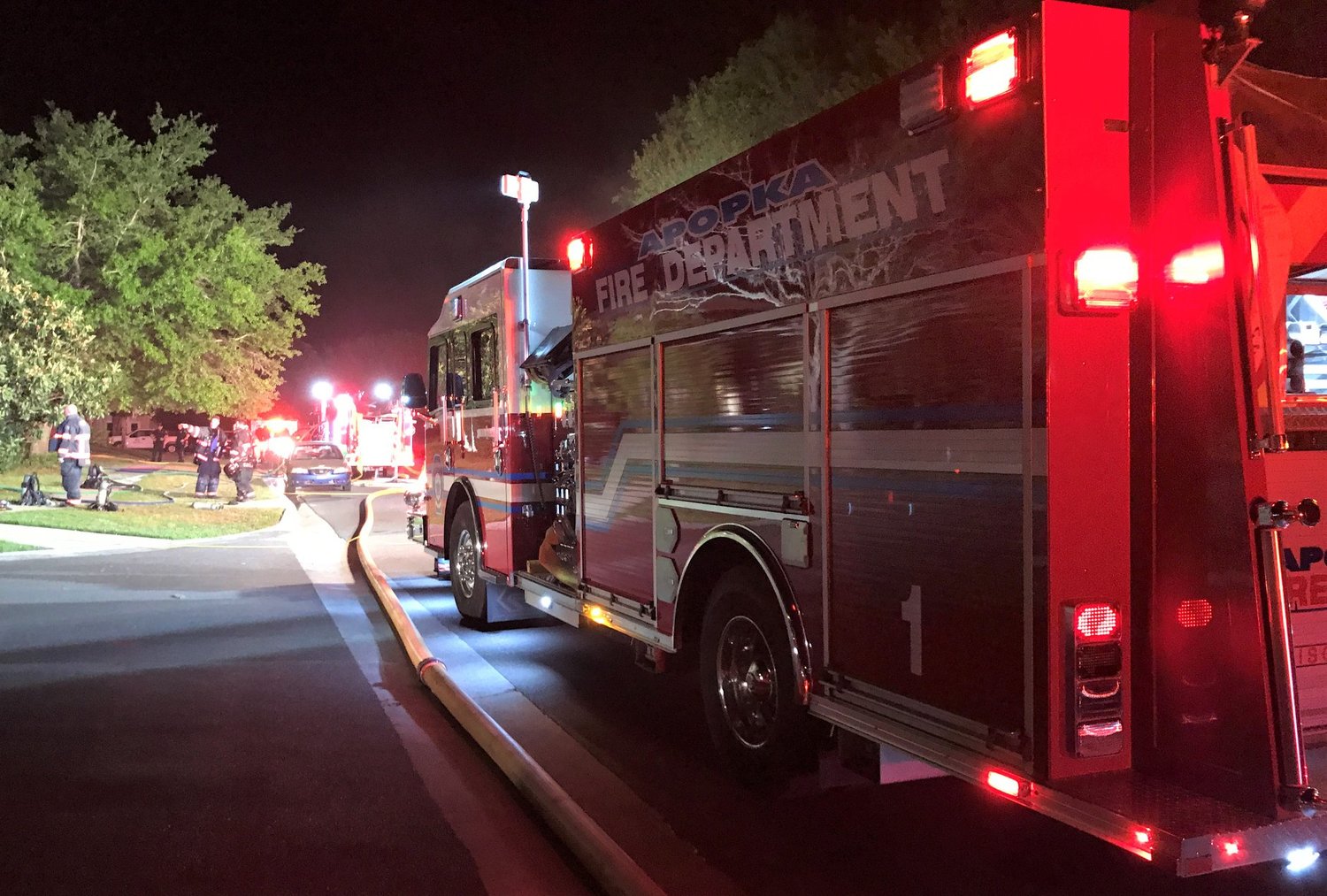 By Reggie Connell/Publisher and Managing Editor of The Apopka Voice

Apopka Mayor Bryan Nelson responded to weeks of social media rumors that he intended to replace Chuck Carnesale as Chief of the Apopka Fire Department.

"...the last two weeks have been a real challenge," Nelson said in response to a public comment during last night's City Council meeting. "But the short answer is he's (Carnesale) not being removed nor is the police chief."

Apopka Mayor Bryan Nelson: "...the last two weeks have been a real challenge, but the short answer is he's (Carnesale) not being removed."

Several statements of support for Carnesale were posted on social media and conveyed in the public comment section of the City Council meeting, and by three city commissioners.

Erica Hoyt, an Apopka resident, paramedic, and registered nurse, spoke first on behalf of Carnesale. In her comments she read from an email she also sent to Nelson, City Administrator Edward Bass, the four city commissioners, and to The Apopka Voice.

I am seeking to either affirm or dispel a statement made on The Apopka Voice news media website at 1900 (7 PM) Tuesday, April 16th, 2019, that Mayor Nelson and City Administrator Edward Bass may be replacing our current Fire Chief, Chuck Carnesale. If my elected officials are considering replacing our current Fire Chief, as a citizen of Apopka, I would like to know the direction my elected officials believe would be accomplished with a different Fire Chief, and who my officials are considering as a replacement. Safety is of paramount importance to me as a citizen in determining where I raise my family.

I have worked professionally as a paramedic and registered nurse with Chief Chuck Carnesale since 1995. Throughout this time, he has demonstrated exemplary professional integrity and the most profound commitment to the Fire Service profession and the City of Apopka. Chief has shown public support of the Apopka Fire Department throughout his tenure with the department by moving up through the ranks and mentoring those entering the profession. His leadership and positive influence also inspired my children when they interacted with him at Fire Camps and other City of Apopka sponsored events. What other fire chief has ever shown kids the importance of teamwork and servant leadership by sliding down a water slide in full uniform, complete with pictures on Facebook? I have had the pleasure of attending numerous other City of Apopka events where Chief Carnasale represented the Apopka Fire Department by speaking or educating the public on various aspects of public safety. He has demonstrated integrity, leadership, and a calming presence guiding colleagues and citizens through many of the most horrific circumstances a human could ever endure. As a very proud citizen of Apopka, I fully support keeping Chief Carnesale as my Fire Chief."

Nelson responded directly to Hoyt after she concluded her remarks.

"I've got a former resident of Apopka who went on about me firing the police chief and the fire chief and it's not true... so I apologize... I know Linda (City Clerk Linda Goff) and I have been dealing with this guy and it's really gotten kind of out of control. I know a lot of you have asked me over the weekend about this, and I had a lady this afternoon tell me that she saw all of this stuff online and she would be worried... scared for your own life. It's about him losing his wife five years ago. We've done testing... water and soil testing for him. But he just goes off on a rant... it seems like nothing helps. He's off the chain. So I don't know how to handle it. But social media, it's the new media that you have to live with. I wanted to give you a little background, but the last two weeks have been a real challenge... But the short answer is he's not being removed nor is the police chief."

Nelson and Bass also responded to Hoyt by email. Here are their responses:

Thank you for your email. We are not replacing the Fire Chief."

"Thanks for your email, Erica. Chief Carnesale is our fire chief and will continue to be. I hope that dispels the rumor.

Thanks for your concern."

Apopka City Commissioner Kyle Becker: I know these rumors didn't start from that one person. It has been in the public realm for a little bit of time, so I just want to make sure that my feelings for the Chief are known and well received and I appreciate his service."

"I couldn't agree with your (Hoyt's) comments more. I think Chief Carnesale is a tremendous asset for the City. I have a whole list of accomplishments that he's done for us. I speak as 100% resident (of Apopka) and 20% of this Council, but a little more as a resident... he does amazing things for us. My daughters were excited when they had the opportunity to sign up for the summer class. Chief Carnesale has maintained our agency as an ISO-1 rating. He's been instrumental in expanding our fire service station 5 and station 6 - which were needed. He even ensures that those people (firefighters and EMT's) have the right equipment and resources to be able to do their jobs accurately. They're just phenomenal ambassadors for this city. I've never heard one bad thing about our fire department. I strive to be as cool as they are, and get the admiration they receive. The fact of the matter is that he has dedicated his life to this particular agency, so you couldn't have somebody who is better suited to serve in that leadership role. So I do hope the comments here tonight are a reality and dictates the long term. I know these rumors didn't start from that one person, who started them most recently. It has been in the public realm for a little bit of time, so I just want to make sure that my feelings for the Chief are known and well received and I appreciate his service."

"I've known the Chief before I was on this side of the desk. He's a community person and anything you ask of him he will assist you with and will far exceed expectations... so I just want to commend him on the job he is doing."

"I have had the privilege of serving both our police and our fire departments monthly with our SHIELD outreach and I can say that Chief Carnesale has been an absolute joy to work with and is dedicated to the city and to the department, always with an enthusiastic attitude and a heart of both excellence and compassion, a rare combination in today’s world."

Fred Kinney and Misha Corbett, two administrators on the local Facebook page "Apopka Then and Now", texted their support for Chief Carnesale to The Apopka Voice. Corbett also spoke during public comments.

"I've known Chuck for over 30 years since the time we were in the Explorers together," writes Kinney. "And for all of those years, he has lived and breathed the Apopka Fire Department. Everything he does revolves around that place. He worked his way up to Chief and deserved the position regardless of who the Mayor was at the time he got the promotion. For whatever the reason is that this is happening, I think it is a huge mistake. I'm sure it will get spun to appear it was his idea or a mutual agreement. He doesn't deserve this."

I've never had a negative encounter with Fire Chief Carnesale," writes Corbett. "Not in the slightest. He exudes positivity. He is a role model I am happy to have my kids look up to, and they very much do. He lives & breathes AFD. I simply will NOT believe or accept that he is not the best man for the job."

Apopka Fire Chief Chuck Carnesale: My focus remains on this fire department and my firefighters and moving it and them forward as the city grows. Let’s put all this behind us and move forward."[/caption]

Carnesale did not speak during the City Council meeting in regard to his status as Apopka Fire Chief but did text The Apopka Voice his thoughts and thanked the members of the community and the elected officials who spoke on his behalf.

"I want to thank the many friends, family, firefighters, and people of the community who reached out to me and offered words of support and encouragement. It’s been overwhelming, to say the least. I continue to stand in support of our city administration's goals and objectives. My focus remains on this fire department and my firefighters and moving it and them forward as the city grows. Let’s put all this behind us and move forward."