Grumbling, squawky and stodgy; the plight of the Wood Stork 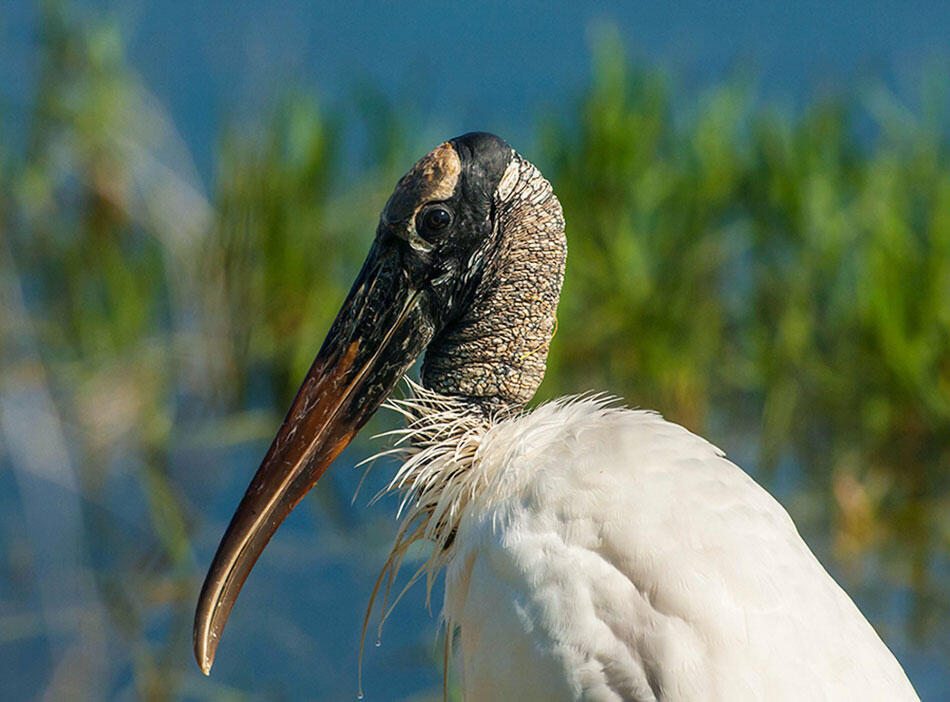 Several years ago, we suffered drought conditions for several months. Consequently, the water table dropped to critical levels.  Because of this, some of our lakes dried up. On one of these lakes, I set up a blind to photograph the visiting bird life.

Back on the dying pond, the herons have been joined by three wood storks and soon two more.  And immediately, the wood storks endeavor to take the pond over like a bunch of gangsters. Grumbling and squawking, they crankily make their presence known.

It should be understood that wood storks are not exactly the beauty queens of the bird world. In fact, they are homely, if not outright ugly beasties, and they are such stodgy creatures. Yes, stodgy is the appropriate word that most describes a wood stork.

They fish, shuffling along like a platoon of old, gray men.  They sweep the water with that long beak, probing, searching, trying to find a fish, take a step, sweep, sweep, and another step.

They remind me of old blind men with canes as they feel their way. Sweep with that long bill, poke and prod, then rush ahead for a few clumsy strides as they pursue some luckless fish. Lift the fish, drop it, and repeat the entire procedure.

Yes, like grumpy, old, blind, gray men, they shuffle along, fishing more by feel than skill.  And it seems that luck plays a substantial part in their success.

As they fish, they shuffle along using their feet to scare up suitable prey, sliding first one foot along and then the other.   Yes, they shuffle. When a fish is detected, they clumsily chase their prey, frantically grasping until that long beak is raised clear of the water, miraculously, or for want of a better word, accidentally clutching a fish!

Another wood stork, noting its neighbor’s success, rushes over and flaps its wings, biting at the fish in its colleague's beak.

The first stork opens its beak in a protesting squawk, dropping the fish back into the water.

And the entire thing is repeated.

It’s a wonder that wood storks don’t starve to death with all the squabbling and quarreling.

Sometimes a fish is captured that is far too large to swallow.

The too large to swallow fish is dragged and carried, none too gracefully, I might add, up onto the shore, and a desultory attempt is made to swallow it.  The fish is turned this way and that, head first, tail first, and sideways.  No luck. And by the way, it is most difficult to swallow an object that happens to be larger than your head.

The bird drops the fish and examines it minutely, head to tail, as though searching for printed instructions on achieving its desired goal.

The fish quietly lays there, waiting in gloomy, piscatorial patience.

Grumbling and complaining in its raucous voice, old Grumpy, the wood stork, picks up the fish, carries it back to the water, and drops it.

The fish shouts, “Home, at last, home, at last, praise God I’m home at last!” But it is not to be.  It is only getting a good soaking before the bird; that ugly, mean-spirited bird tries to swallow it again.

With the fish’s tail gripped tightly in its bill, the stork, this caricature of a bird, drags the fish that won’t be eaten back onto the mud bank again.

For the most part, the fish is uncomplaining. After all, it is difficult to say much if you are being dragged over sticks, rocks, and flotsam that are pounding and pummeling you and threatening to eliminate what little gray matter you might have.

Back up on the shore again, the unfortunate fish is turned this way and poked and prodded.  Head first, then tail first; the effort is all to no avail.  The stork finally acknowledges that it cannot swallow the fish and returns to the water to try his hand, err; excuse me, beak at another, and perhaps smaller, more swallowable fish.

The fish that was too large to eat is abandoned high and dry. It shouts little fishy obscenities and threats at the storks retreating. And the insults!  ‘Quitter!  Failure! Come back here and fight like a fish!’  It shouts, but the stork ignores or most likely does not hear the insulting comments. It is too busy fishing.

I wonder what the fish is thinking.  Some people claim that fish don’t have feelings; that they don’t think. I wonder?

Perhaps the fish was terrified when it thought it would be eaten. Then, it was relieved when it was dropped back into the water.  Then, when it realized that it was not going to be eaten but left to flop out its life high and very dry on a mud bank, terrified again! I mean, there is just no pleasing some folks.

As I said, wood storks are such stodgy birds.