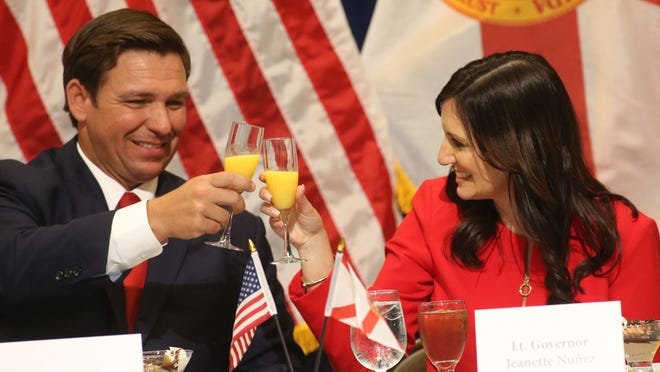 Beginning July 1, Florida will ascend from 46th in the nation in base teacher salary to fifth, according to the National Education Association’s (NEA) annual ranking

With less than a week before Florida’s new fiscal year begins, Gov. Ron DeSantis has vowed to slash the $93.2 billion budget lawmakers adopted in March with the “veto equivalent of the Red Wedding from ‘Game of Thrones.’ ”

State revenues were $1.8 billion short of March and April estimates, and some analysts forecast up to $10 billion in state revenue shortfalls for the coming fiscal year.

Up to $1 billion in general fund spending is expected to be vetoed by the governor, who claims the state’s emergency statutes allow him to unilaterally balance the budget and allocate up to $12 billion in federal COVID-19 assistance without a special session of the Legislature.

DeSantis cleared one concern Wednesday, however, when he signed House Bill 641, a $500 million appropriation to raise the starting salary of Florida’s K-12 classroom teachers to $47,500 a year.

Beginning July 1, Florida will ascend from 46th in the nation in base teacher salary to fifth, according to the National Education Association’s (NEA) annual ranking.

DeSantis said during a news conference Wednesday at Hialeah Gardens’ Mater Academy Charter School there were “misgivings” the Legislature would approve the “required policy and financial commitment” to dramatically raise teacher salaries.

“But we really thought it was important,” he said, noting lawmakers delivered a “better” bill than what he proposed by earmarking $100 million to pay veteran teachers more.

After the COVID-19 emergency created “a different fiscal picture than what we were dealing with in January and February,” there was speculation DeSantis would delay the pay hike until Jan. 1 or next fiscal year, but the governor said they will go into effect July 1.

“This will be there 100 percent,” he said. “We will have to make tough budget choices, but this is important.”

“We applaud [Gov. DeSantis] for signing the teacher pay bill into law and for maintaining a commitment to educators, especially in this time of economic upheaval,” FEA tweeted.

“The $500 million investment in Florida’s teachers is especially meaningful given the current circumstances. It speaks to the deep value of public education to our state’s future,” FEA President Fedrick Ingram said. “We’ve all heard the reports that many issues, including some of the governor’s priorities, are on the chopping block for vetoes. The decision to leave this investment for Florida schools intact is an acknowledgement of the hard work our members do each and every day for Florida’s students.”

Senate Appropriations Committee Chairman Rob Bradley, R-Orange Park, recalled last summer when DeSantis met with him and residents in a Middleburg school gym and pledged, “This was going to be the year of the teacher.”

“Today, it is happening,” Bradley said. “Promise made, promise kept. The year of the teacher is a reality.”

DeSantis sald it was an embarrassment Florida ranked in the bottom for average teacher salaries. Boosting pay could “entice some more people who are young and thinking about what they want to do” to become teachers.

“Those with a servant’s heart, it sure makes it easier if you have a minimum salary that makes ends meet,” DeSantis said, adding the pay increase will “fill the ranks of good people for generations to come.”

Florida Education Commissioner Richard Corcoran said the raise is “the single largest teacher compensation package in the history of Florida.”

“It is just a fantastic package,” he said. “The biggest winner is the school children. The kids are the winners because they will have tremendous quality education outcomes.”