Fallen firefighter is remembered and honored by family, friends, his AFD brothers and sisters, community, and fire departments from around the state 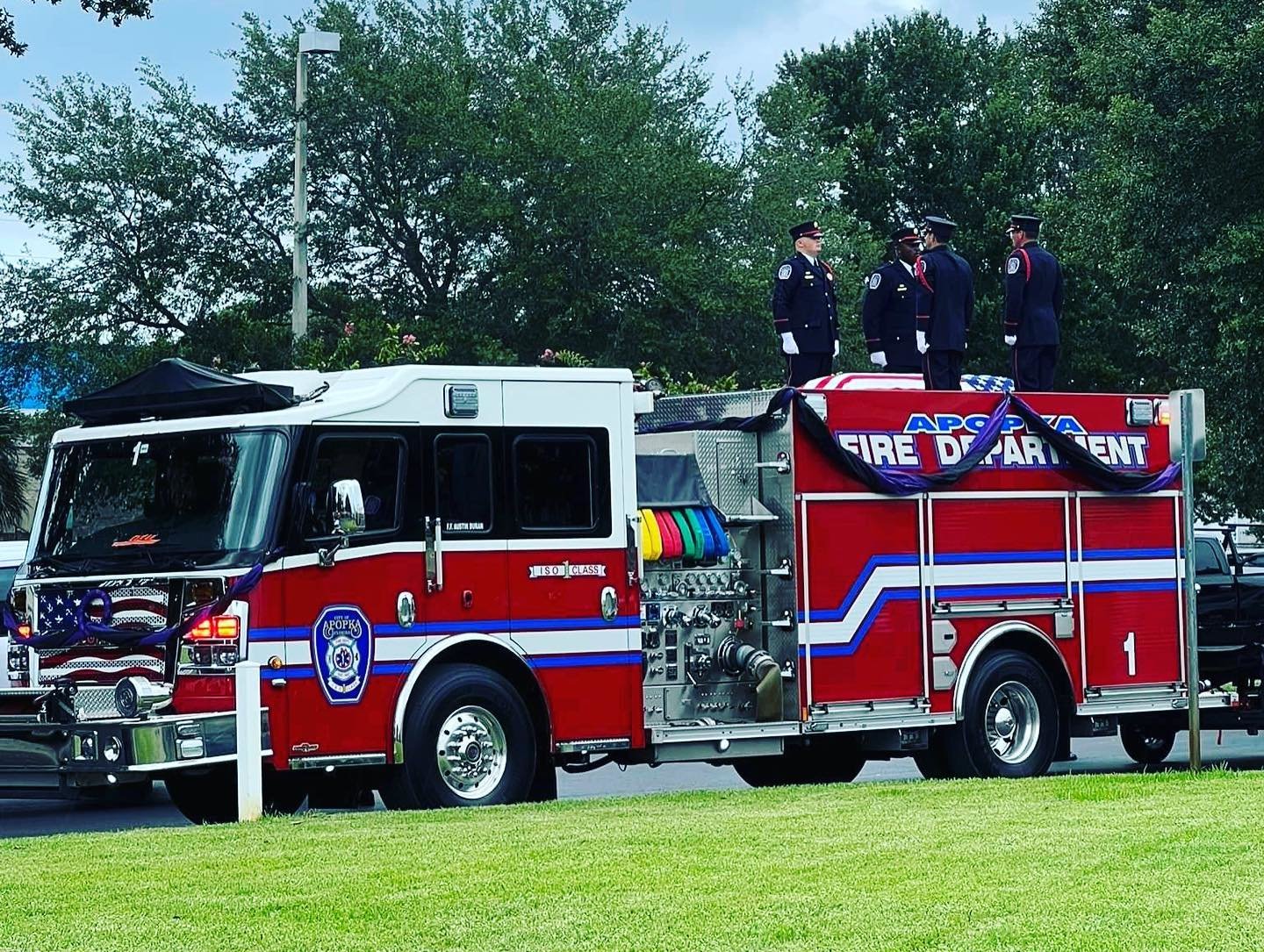 The 25-year-old Firefighter/EMT for the Apopka Fire Department died 15 days after suffering injuries related to a tragic workplace accident at Fire Station 1.

The community lined the streets along with Apopka fire trucks, police cruisers, and agencies from other departments across the state to honor Duran. The procession made a symbolic drive past Apopka's Fire Station #1.

The Duran family had a private viewing early Saturday morning at Loomis Funeral Home. His brother and sister firefighters attended the service at Journey Christian Church - which was limited to family members and firefighters. 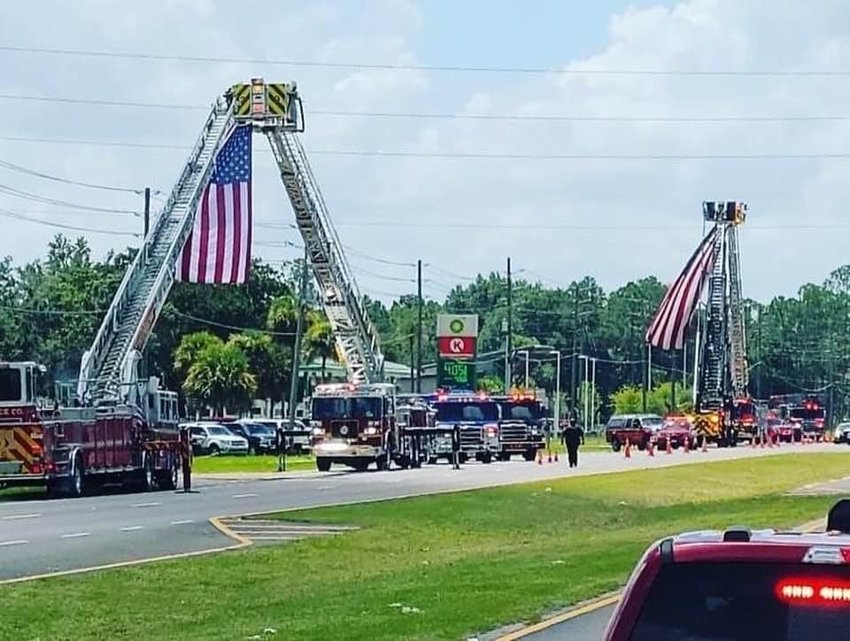 Duran was a member of the AFD since he was in high school in the Explorer program. He officially joined the AFD in July 2020.

After the service, the outpouring of grief, emotion and condolences again extended to local social media as it did after the announcement of Austin's passing.

The Apopka Fire Department released the following statement on its Facebook page:

"Where do we begin? The last few weeks have been indescribable and filled with a range of emotions that we have not been able to fully process yet. In the midst of this all we have seen and felt first hand a love and support like no other. That love and support was even stronger yesterday as we laid our Brother Austin Duran to rest.
We would like to extend a sincere and heartfelt thank you to the Orlando Fire Department, Maitland Fire Rescue Department, Winter Garden Fire Rescue Department,Ocoee Fire Department, Orange County Fire Rescue Department, Florida along with those of our own who stayed back to ensure the safety of our community and staff our fire stations and Dispatch Center so that our Apopka Fire Fighters could attend Austin’s service.
Your selfless actions are the pinnacle definition of what family means and we are forever grateful to you all.
To the Apopka community, your show of support brightened our hearts in one of our darkest moments and showed us how truly loved we are by you.
To all the outside agencies who traveled from all across the State and lined the roads with their trucks, we are forever grateful. We saw first hand the definition of brotherhood lived out and can not define what that means to us.
To the Duran family, thank you for sharing your son, brother, boyfriend, and friend with us. We consider ourselves blessed to have felt the impact he had on all of our lives and want you to know you will always be part of our Apopka Fire Department Family.
It’s been said that “You cannot avoid the storms of life. But you can learn how to withstand them” and with the love and support of our community, fire department brother and sisters, and our families we will be able to get through this together." 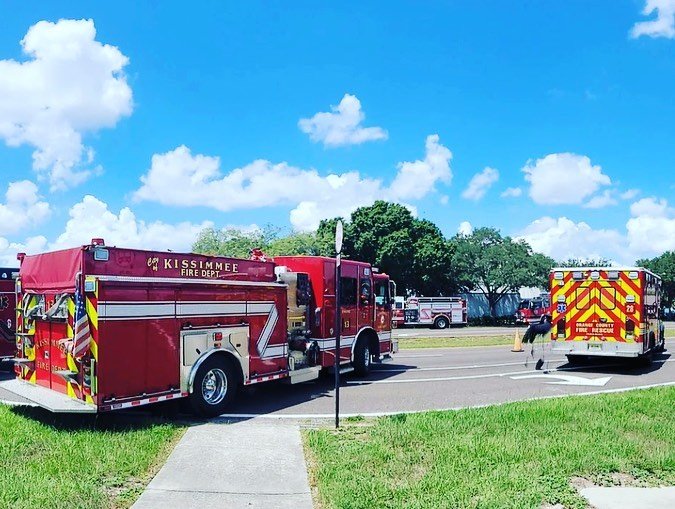 Alex Klepper, the President of the Apopka Professional Firefighters Association, posted his thoughts on Facebook:
"I have so many people to thank for making this come to fruition. So many people I’ve never met and wouldn’t recognize in the same room came to our aid when we needed it most. Austin’s passing is a devastating loss but at least we were able to honor his memory and his family in the best way possible.
Fire department brothers and sisters descended from ALL over the state of Florida to prop up our family. IAFF 12th District Fire Fighters and Florida Professional Firefighters 3rd District leadership steadied my aim, handled my stress, fears and panic ridden phone calls. Bulls Fitpit swooped in and helped me and my brothers/sisters cross the finish line and kept me personally together.
At the end of the day we gave our brother and his family the respect and honor he and they deserved. I have struggled all night to find ways to articulate how proud I am of all of my Apopka brothers and sisters, the weight we have carried this week is substantial and I’m so proud to operate on your behalf. Our fight to right wrongs has only just begun and #austinsarmy will only grow in its strength and reach. We are not done. Count on it brother."
Apopka Mayor Bryan Nelson expressed his condolences to the Duran family, but was also moved by the community's attendance to honor Austin.
"Today was a bittersweet day," he said. "The outpouring of love shown to The Duran family and our Apopka Firefighter family was incredible. The funeral service and processional before and after were befitting Apopka’s hero, Austin. Rest In Peace, Austin Duran." 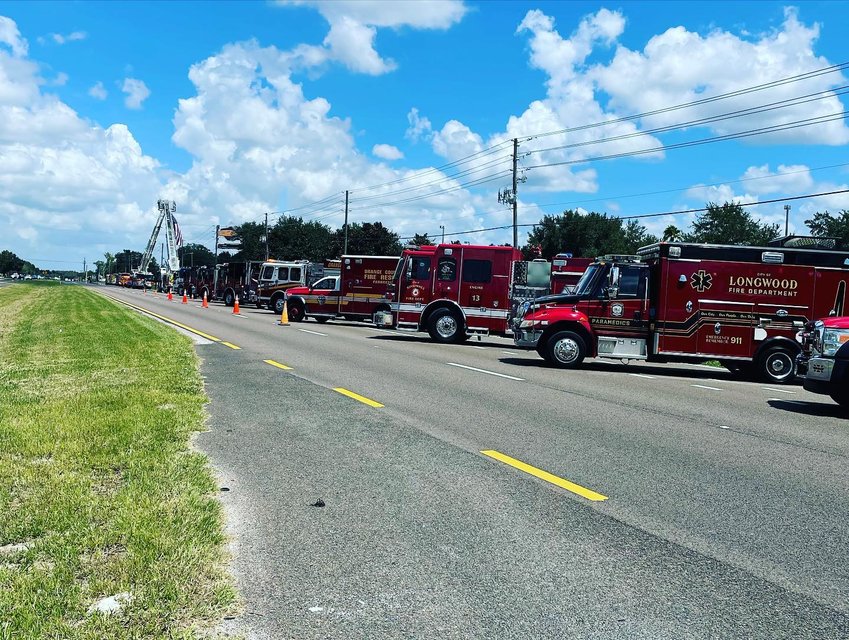 Apopka City Commissioner Doug Bankson was also moved by the procession, and the participation of so many fire departments.
"Today I witnessed one of the most amazing outpourings of love and honor I have ever seen as the whole community came together to honor our fallen hero, Austin Duran," he said. "Not only did the Apopka Fire Department gather in procession, but departments from around the whole region came to pay respects. Along the way people throughout the community stood in salute and silence as he passed by laying atop one of the engines that he loved. Austin’s family were so gracious to share him with us, and we will never let his memory fade. May his passing bring a renewed vision of unity and brotherhood, throughout the fraternity of men and women who serve, and to a grateful community. God bless you Austin, until we see you again."
"My prayers are with the family during this difficult time," said Apopka City Commissioner Alexander H. Smith on his Facebook page.
Our hearts are broken over the loss of Apopka firefighter Austin Duran," Apopka City Commissioner Nick Nesta wrote. "He bravely served our community and fought for his life after a tragic injury. Our firefighters are such a huge and integral part of our community; the enormity of this loss will be felt throughout the department and our city. We pray for peace and comfort for the Duran family during this time. You will not be forgotten, Austin." 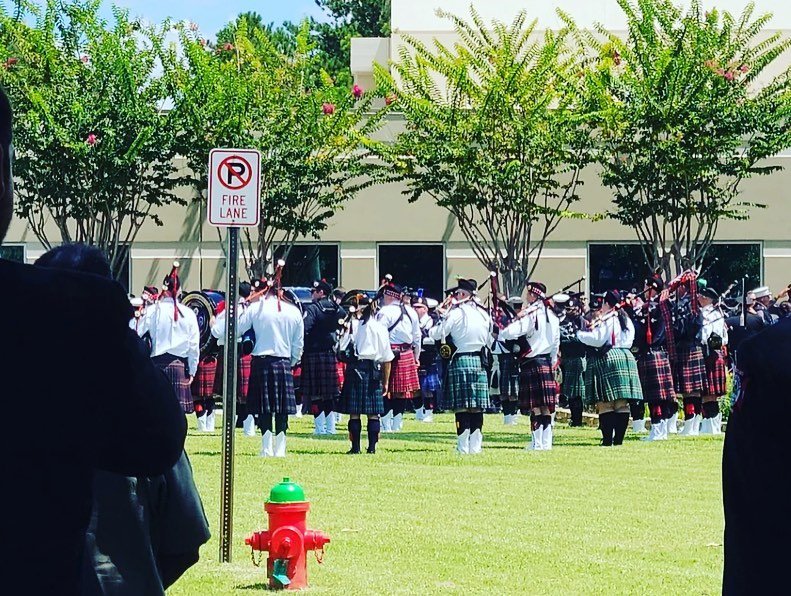 Apopka City Commissioner Diane Velazquez posted a brief, but moving statement on Saturday before the services began.
Today  , we pay our final Respects to Apopka Fallen Firefighter Austin Duran as he is laid to Rest. We honor his life; his dedicated service and the ultimate sacrifice made in the performance of his service to our City of Apopka. May God Bless his spirit in his eternal life."
Former Apopka City Commissioner Kyle Becker, who is running to return to Council, posted his thoughts on his Facebook page.
"Tough day today as we mourned with many; but the tribute paid to Firefighter Austin Duran was befitting the impact he made on friend, family and our community," Becker said. "There were so many human moments of honor, sorrow and celebration of Austin’s life that no picture will ever be able to capture or convey its essence. The fire family is not one I will ever officially be a part of, but it is something in which I will always be in awe. The agencies that came from all parts of our state prove this bond, and boy was it something to see. Even beyond our state and country, a colleague who I work with is a volunteer firefighter in Canada, and their agency was also thinking about Austin and Austin’s Army today.
Difficult times are still ahead as the men and women of Apopka Fire still process this loss, I’m sure I can speak for my fellow residents when I say we are here for you, and thank you for all you do for us. #AustinsArmy" 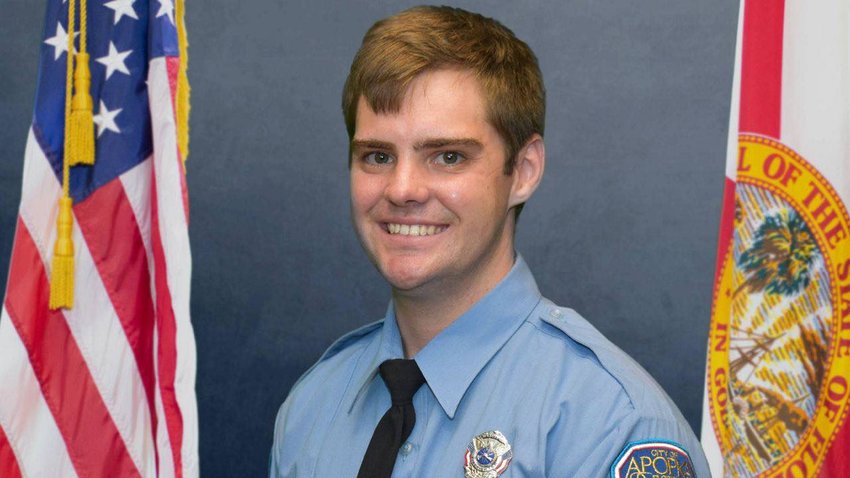