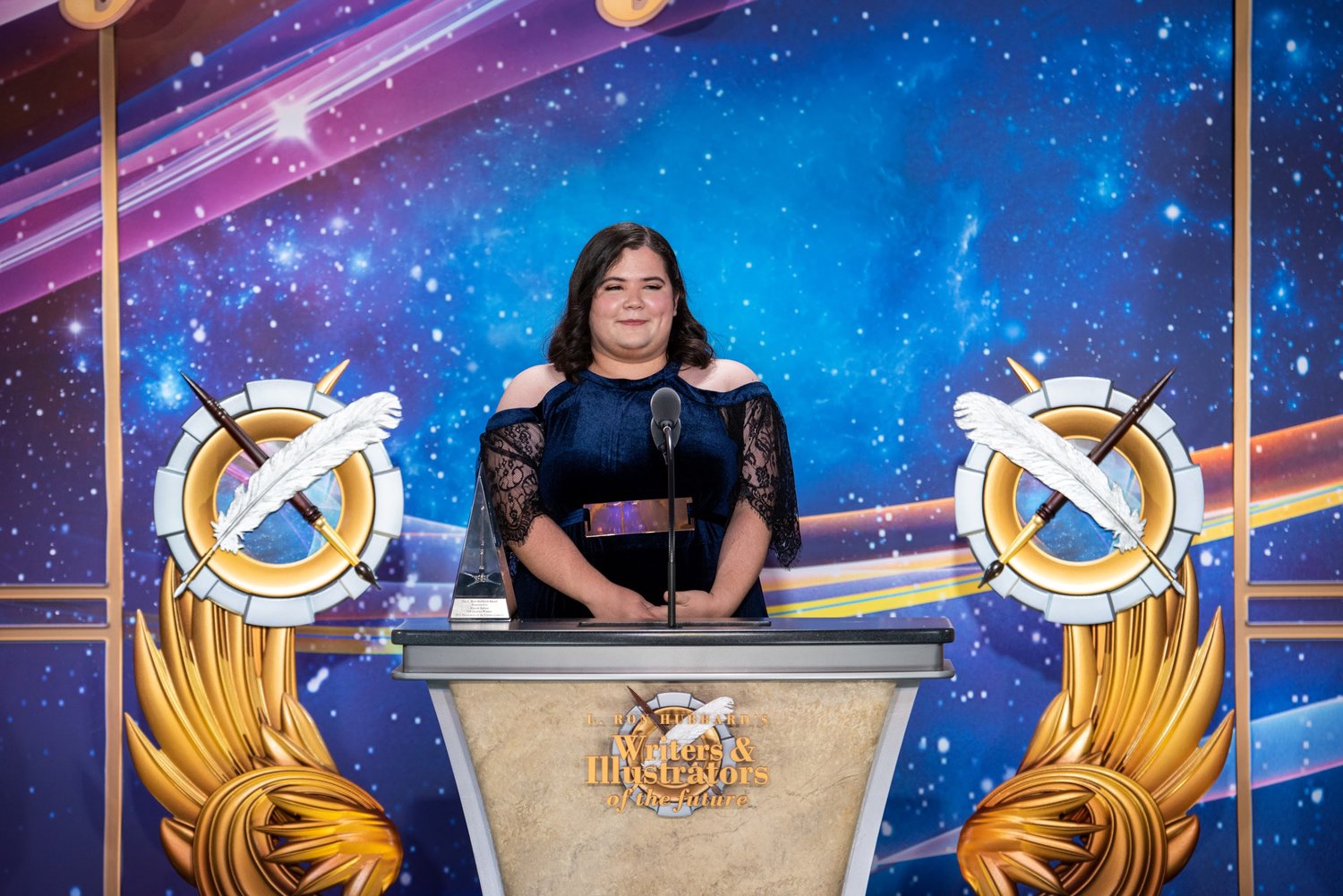 Apopka artist Mariah Salinas was honored at the L. Ron Hubbard Achievement Awards Event in Hollywood as a winner in the Illustrators of the Future contest, and her art is published in the international bestselling anthology, Writers of the Future Volume 37.  Salinas, a graduate of Wekiva High School, is currently earning a degree in Illustration from Ringling College of Art and Design and living in Sarasota.

The awards event at the Taglyan Complex on October 22nd was a black-tie gala honoring all the winners of Volume 36 and Volume 37 as well as announcing the grand prize writer and illustrator winner from each volume.

Salinas has been drawing as long as she can remember—possibly even longer. Either doodling on the wall with crayons or scribbling in her notebook in the middle of algebra class, Mariah was always creating. She tried her hand at many different methods and mediums of creation: sewing, marker, watercolor, acrylic, clay, 3-D animation, and her favorite - digital art.

Salinas has won many accolades, including the title of Senior Representative of 2-D Art during her 2020 senior year award night, the Senior Art Legacy award from her high school, the Presidential Scholarship from Ringling College of Art and Design’s pre-college program (which happens to be the college she is currently attending), and now the Illustrators of the Future Contest!

She is working toward a degree in illustration and hopes to create her own comics with her best friend, who is joining her on her journey at Ringling. She can’t wait to see where this road takes her!

The Contest, one of the most prestigious writing competitions in the world, is currently in its 38th year and is judged by some of the premier names in speculative fiction.

The intensive mentoring process has proven successful. The 440 past winners of the Writing Contest have published 1,150 novels and nearly 4,500 short stories. They have produced 32 New York Times bestsellers and their works have sold over 60 million copies.

The 370 past winners of the Illustrating Contest have produced over 6,000 illustrations, 360 comic books, graced 624 books and albums with their art, and visually contributed to 68 TV shows and 40 major movies.

The Writers of the Future Award is the genre’s most prestigious award of its kind and has now become the largest, most successful, and demonstrably most influential vehicle for budding creative talent in the world of contemporary fiction.

Since its inception, the Writers and Illustrators of the Future contests have produced 36 anthology volumes and awarded over $1,000,000 cumulatively in prize money and royalties.

For more information about the Contests, go to www.WritersoftheFuture.com.